Sanjay Dutt: I read Mahabharata, Ramayana and Gita during my jail term 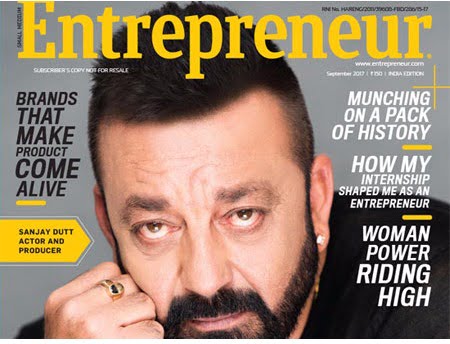 Bollywood’s superstar Sanjay Dutt is back with a bang as his film BHOOMI is set to hit the theatres soon. Now-a-days, we see actors slaying on the cover of prestigious magazine covers.

Sanju Baba is on the cover of Entrepreneur India magazine as he talks about his renewed faith in God, the ups and downs in his life and his comeback to movies.

Sanju Baba looks, suave, fierce and is ready to rule the Bollywood once again after a hiatus of 4 years.

This is Dutt’s first magazine cover after a sabbatical of four years. In the September issue of Entrepreneur India, Dutt talks about “How I Did It, Rise, Fall and Return” – sharing his ups and downs and how he’s making a comeback in the industry.

Talking about his life in jail, in the Entrepreneur cover story interview, Sanjay Dutt said, “In jail I realized that I had to be there for a certain amount of time and there is nothing I could do, so let’s make the most of it. Instead of being regressive, let’s move forward and make it positive. I have deep faith in God, so I read the Shivpuran and Ganeshpuran, Mahabharata, Ramanyana and Gita.”