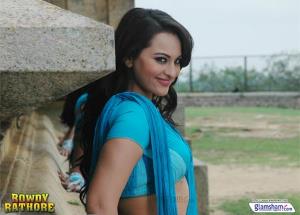 Actress Sonakshi Sinha is on cloud nine now! And why shouldn't she? With just two films old, this 'dabangg' girl has scored Rs.100 crore mark for the second time in a row.

Sonakshi, who made her debut in DABANGG opposite Salman Khan which grossed above 100 crore, is enjoying the success of her second film ROWDY RATHORE which stars Akshay Kumar.

Sonakshi tweeted on the social networking site and thanked the ROWDY team. Tweets Sonakshi, "It's a century and counting!!! THANK YOU to everyone who's spent their hard earned money on that ticket that's gone into making Rowdy Rathore the massive hit it's become!