A ‘Game of Thrones’ to remember 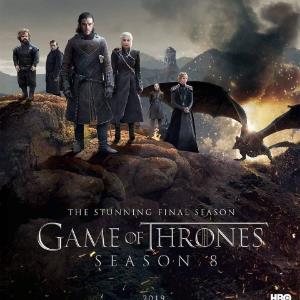 David Benioff and Dan Weiss brought alive the world of "Game of Thrones" on the small screen in 2011, and it has been a ride full of drama, action, betrayal, murder, mystery, hope and scares since then, making it a global phenomenon.

On the surface, the show, based on George R.R. Martin's novels, comes across as a thrilling quest to the coveted Iron Throne. But it also stands for complicated political gambits, scheming and the backstabbing nature of people and finding love in troubled times.

The most alluring thing about the show is that just when you place a bet on a character, or any other event, the show proves you wrong. It leaves fans thinking — 'did that really happen?'.

With the final piece of the whole puzzle releasing on Sunday, IANS looks back at the whole journey of the HBO show — from its most defining moments to varied fan theories to the famous catch-phrases that continue to live on.

Here are some important moments leading up to the final chapter:

* Ned Stark's head getting chopped off: It was the first shocking moment wrapped in the narrative of first season. Many thought of him as a hero, and were shocked with his execution, and for many, the moment prepared them for further surprising deaths in the show.

* The Red Wedding: Here red is not the colour of garment, but blood. The episode of season three is famous for the bloody and brutal wedding scene. What happened? Robb Stark was shot with arrows, his wife was stabbed to death and Catelyn Stark's throat was slit as she pleaded for mercy.

There was another not-so-happy wedding — Purple Wedding where King Joffrey (Jack Gleeson) was poisoned to death at his own marriage feast.

* Jon Snow's resurrection: Jon Snow lay dead at the end of the season five, and this moment turned out to the biggest cliffhanger of the show. He came back to life in the opening episode of season six with some magic.

* The walk of shame: An iconic scene from the fifth season starring Lena Headey's Cersei Lannister. After Cersei is found guilty of falsehood and fornication, she strips down to nothing and takes the walk of atonement.

* The Battle of the Bastards: Fans were waiting for the moment when Jon Snow would fight with the evil Ramsay Bolton, who raped Jon's sister Sansa and also tortured Theon Greyjoy and cut off his penis. It turned out to be the finest war scene on the small screen, and ended with the death of Ramsay.

* Mother of dragons: After much talk, dragons appeared in the show when Daenerys Targaryen walked out of a burning funeral pyre of her husband Khal Drogo. She took three ancient dragon eggs, and not only survived but came out with three baby dragons.

* Cersei Lannister blowing sept: The moment of gain and loss for Cersei as she killed several of her enemies by blowing up the Sept of Baelor. She also lost her son Tommen, who killed himself after losing his wife Margaery in the gigantic green explosion.

* Hodor holds the door: He was a gentle giant, and only said one word 'Hodor'. The mystery behind his name unraveled in the sixth season. It explained the giant's past and also how once talkative stable boy named Wylis sacrificed himself to prevent an army of monsters from getting to Bran Stark, by accepting the command "Hold the door".

The show has spawned many catch-phrases as well. And they are:

* "The things I do for love": Jaime Lannister.

* "When you play the game of thrones, you win or you die": Cersei.

* "You know nothing, Jon Snow": Ygritte.

* "If you think this has a happy ending, you haven't been paying attention": Ramsay.

The finale of "Game of Thrones" season eight will air internationally on Sunday. It is aired in India on Star World.

Though the end is near for the "Game of Thrones" original series, the saga will continue in form of several spin-offs, which have been ordered by HBO. [IANS]