Adele thanked 'Starstruck' judge Shania Twain for hiding at her Vegas show - admitting she would have "self-combusted" if she'd known the singer was there. 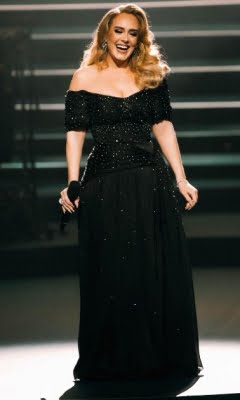 ‘Rolling in the Deep’ hitmaker Adele thanked ‘Starstruck’ judge Shania Twain for hiding at her Vegas show – admitting she would have “self-combusted” if she’d known the singer was there. ‘The Man! I Feel Like a Woman!’ star, 57, rocked up at the mum-of-one’s residency show in Sin City along with a host of famous faces, reports ‘The Mirror’.

Adele, 34, is one of the world’s best-selling artists, but when she saw Shania at the end of the gig, she couldn’t contain herself.

Posting a pic of the Canadian star sitting in the front row, sporting a hat, the Tottenham-born singer wrote on Instagram: “Thank god you had a hat on @shaniatwain. I would have self-combusted had I seen it was you!! I adore you; I can’t believe you came to my show.”

According to ‘The Mirror’, Shania was joined at the sold-out concert by rapper Stormzy and Adele’s partner Rich Paul. Adele has just completed the second weekend of her residency at The Colosseum venue at Caesars Palace, having cancelled the gig earlier this year, telling fans it “wasn’t ready”.

After months of uncertainty, Adele finally announced the new dates for the shows, which kicked off on November 18. As she returned to the stage, the singer, looking resplendent in a black velvet frock and oodles of diamonds, told audiences the show “looked just like how I imagined” and thanked them for “coming back to me”.