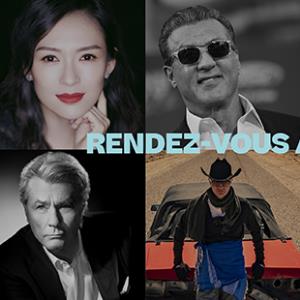 Sylvester Stallone, AKA Rocky Balboa AKA John Rambo will be in Cannes to announce the forthcoming release of his brand new film RAMBO V : LAST BLOOD. The Festival will be honouring him on the 24th of May by screening a restored 4K print of RAMBO : FIRST BLOOD before which the star will share the first images of his new film. Sylvester Stallone wrote or co-wrote almost all his films and the journalist Didier Allouch, who is also the correspondent of Cannes Film Festival in Los Angeles will conduct a master class with Stallone, exploring his career as a writer and actor.

The festival will honour the veteran actor Alain Delon with an honorary Golden Palm on May 19. That morning, Samuel Blumenfeld, journalist at Le Monde will be in conversation with the legendary actor in a Master Class format.  Cannes film festival this year will also host master classes with  the Danish director of the much acclaimed DRIVE and the Chinese Actress Zhang Ziyi who started her career in Zhang Yimou’s THE ROAD HOME. The world remembers her for her roles in Ang Lee’s CROUCHING TIGER : HIDDEN DRAGON and Zhang Yimou’s THE HOUSE OF FLYING DAGGERS.

In the midst of all creative, academic and business activities, Cannes has not forgotten to do some number crunching. The Festival received 1845 feature films and 4240 short films for consideration in the Official sections. It will screen 8 debut features in its official sections and a total of 26 first features for the Golden Camera award with the debut films in the side bar Directors’ Fortnight and Critics’ Week. The official selections represent 39 countries as producers/co-producers.

Being a signatory to 5050 X 2020 Gender Equality statement, the festival is well on its way on this commitment. The Festival team in Paris working from January onwards consists of 109 personnel of whom 66 are women bring their score to 61%. In Cannes 865 more people join the team of which 46% are women. To quote the Festival, “The 2019 team will comprise of 974 people, 468 women and 506 men, bringing the women to 48%.