DOCTOR SLEEP: Ewan McGregor on all about Danny 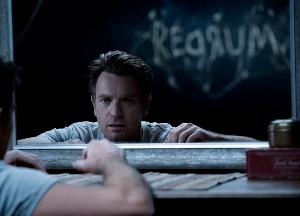 DOCTOR SLEEP is set to release on Nov 8 by Warner Bros Pictures. The movie continues the story of Danny Torrance, 40 years after his terrifying stay at the Overlook Hotel in THE SHINING. Directed by Mike Flanagan, from his own screenplay based upon the novel by Stephen King, here we find Ewan McGregor sharing all about Danny.

What drew you to Stephen King’s Doctor Sleep?

I think even more than the source material—King’s novel and Kubrick’s movie—for me, it was Danny’s story and the idea that he’s hit rock bottom. It was an opportunity to explore someone who is an alcoholic in recovery, and I hadn’t done that before. It really interested me.

Were you a fan of Stephen King’s work prior to this role?

I’d read some of his novels. The one I remember the most was reading Christine when I was at drama school. But, I’m not really a horror or scary genre person, so I hadn’t seen a lot of his adaptations or read many of his books. I like the novel Doctor Sleep very much, which I read after the script. Then, I went back and read The Shining, which I really enjoyed as well. It is just amazing for an actor to have all of this back-story.

What happens to Danny between surviving the Overlook Hotel and becoming the damaged adult we meet in Doctor Sleep?

We get to see Danny as a troubled child, being haunted by the characters from the Overlook. Then, he learns how to trap them, to lock them away inside. It’s similar to his alcoholism, in that he’s locking everything away inside without actually dealing with it. But it comes back to bite him in the end.

In the novel, he talks about his mum’s passing in terms of where he’s been in-between then and now. Witnessing her death probably tipped him over the edge. He doesn’t have a dad. He’s an orphan, on his own. That’s when he starts slipping, sliding. He becomes a drifter from town to town. He takes jobs as orderlies in hospitals. He does whatever he can to be able to just drink his feelings away.

Addicts eventually hit rock bottom—for Danny, his is the night he spends with Deenie, a woman he meets in a bar. He wakes up and has no idea who this woman is. She’s passed out. He gets dressed and goes to his wallet and his money’s all gone. There’s coke on the table, and he flashes on buying it, using all of his own cash. So, he goes to her wallet and is taking her money…when a baby crawls into the room.

That’s when his only friend from the Overlook, Dick Hallorann, appears. He asks, “Doc, is this what you’re going to do? Is this where your life has brought you?” He takes the money anyway. He leaves without knowing if she and her child will be okay. And it haunts him, even into his recovery. It takes him years to admit it.

Danny’s not only trying to drown out his past, but also, his ability, his shine. Once he’s done with alcohol, how does he now cope?

That’s when Abra comes into his life, and she gives him a reason to begin to deal with his shine, re-inhabit that part of himself. It’s like facing your worst fears, I suppose. And in order to combat Rose the Hat and the True Knot, and the dangers that they pose, he has to allow that psychic part of his being to live again…and he doesn’t want to.

He does allow himself to use his abilities at work?

He realizes that when he’s working in this hospice, that he can help people in the time when they pass away. He can use it as a comfort for them. He becomes Doctor Sleep.

And what about the shine that both he and Abra have?

The thing is like a psychic power, isn’t it? And it’s a little bit different for everyone. Abra’s is a different level, very powerful, but they also have distinct skills in that realm. There are also varying strengths and weaknesses. She’s the strongest that Danny’s ever come across. Rose the Hat is also incredibly powerful, but her powers go in a different direction.

Abra first reaches out to Danny by writing messages on a wall in his apartment. Then, she takes a bus from home and finds him. She knows Rose and the True Knot have been preying on children with shine, and she asks Danny for his help. How does that go?

He doesn’t help Abra initially. He meets her and he’s impressed by the fact that she’s found him, and he can feel the power of her shine. But he tells her to just forget all of it. These people are going to sense her and come after her. She should ignore it, try to live without her shine, to do what Danny has done…which hasn’t led him to a better life, actually. Afterwards, his friend Hallorann appears again. He tells Danny this will be the last time he sees him. He says, “You’ve got to help this girl.” It’s like Danny’s conscience speaking to him. He realizes Abra is right and that they have to do something. It’s related to his life—he’s spent eight years in recovery and he’s getting better, but he’s still not living his true life. Part of his true life is his shine. He realizes that it’s like another recovery. He’s got to be able to live accepting who he is, every part of himself. And now, he’s going to use that part of him to help Abra conquer Rose the Hat and the True Knot.

How about working with Mike Flanagan?

I liked working with Mike a lot. When I first met him, he was editing his series, The Haunting of Hill House. I think he wrote Doctor Sleep while shooting the series. He just doesn’t stop…or sleep much, obviously. [LAUGHS] He’s an editor first, so he thinks in shots. He’s a good storyteller, knows exactly what shots he needs. It was exciting watching him and his DP [Michael Fimognari] drawing from the cinematic language that Kubrick used. It was not only how they used the camera, but that they rebuilt the Overlook Hotel. We got to work on those amazing sets. It was really cool.

Twitter
Flip
Koo
Previous article
Sonakshi Sinha lashes out at an airline company for damaging luggage
Next article
Ananya Panday: I attract love triangles
This May Also Interest You
News