‘Friends’ actor: I don’t see a reason to revisit it 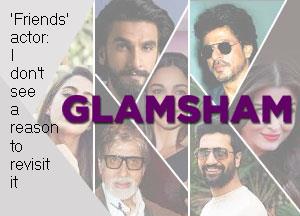 Los Angeles, Sep 30 (IANS) “Friends” actor James Michael Tyler says he doesn’t see a reason to revisit the popular show but if anything ever came up in the future, he would definitely bleach his hair again and reprise his character Gunther.

“She’s very tender, open and honest, down-to-earth and grounded. She embodied the character of Rachel so perfectly.”

“It was just a joy to work with her, as a fellow actor. She was very professional on the set, always on time, always knew her lines and was also very generous as an actor.”

Despite the gushing comments, the Mississippi-born star admitted there’s no reason to film a reunion episode.

“I know that the creators of the show have all said in the past, that they’d wrapped up the show in the way that they wanted,” he said.

“And I have to agree with them on that. They tied up a really good series, which at this point has a good beginning, middle and end, and myself… I don’t see a reason to revisit it, that’s just my opinion,” Tyler added.

“That being said, if anything ever came up in the future, I would definitely bleach my hair again and reprise Gunther, as I really did love that character.”

Gunther’s character was certainly not planned.

“I never auditioned, I came on the first episode of the first season pilot as an extra. I was a background performer,” he said.

“I did not have the name Gunther until the 33rd episode which was midway through the second season. The writers gave me one word to say, ‘Yeah’, and it just kind of built up from there. It was never intended to be a character.”

Jennifer Love Hewitt, Freddie Prinze Jr in talks for 'I Know What You Did Last Summer' reboot

Kevin Costner may not continue in 'Yellowstone'; McConaughey in talks for a role

'For You' tab to stay on users' preferred timeline on Twitter

Fitbit back after brief outage

Jennifer Love Hewitt, Freddie Prinze Jr in talks for 'I Know What You Did Last Summer' reboot

Kevin Costner may not continue in 'Yellowstone'; McConaughey in talks for a role