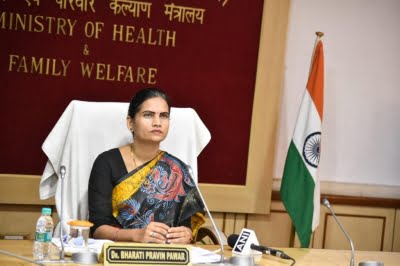 New Delhi, Dec 6 (IANS) Minister of State for Health Bharati Pravin Pawar said on Tuesday “the seeds of gender equality have been sown in our country through various steps and will reap benefit for our society on the whole”.

“As a consequence, women empowerment will lead to an equitable, inclusive and diverse growth story of India,” said Pawar while chairing the ‘Women leading Change in Health and Science in India’ Conference along with Jitendra Singh, Minister of State (IC) Science and Technology, here on Tuesday.

Melinda French Gates was the Guest of Honour at the event.

Underlining the role of ASHA, the MoS Health said that the significance of the women’s crucial role in progress especially in health sector can be adjudged from the fact that one million ASHA (Accredited Social Health Activist) workers, who remained at the forefront of healthcare service delivery in India especially as first line of defence in the crucial period of Covid-19, received the Global Health Leaders Award-2022 in the backdrop of 75th World Health Assembly.

Highlighting various steps taken by Central government, Pawar emphasised: “The government is dedicated towards making women capable in every field. Taking consistent efforts, government has initiated new programs and continuing previous interventions through its institutions, scholarships, financial support etc., leading to a vibrant ecosystem where women can flourish and harness their full potential.

“We observed that post-independence, attention was not given on this aspect of India’s growth story, but under the visionary leadership of Prime Minister several steps have been taken. Flagship schemes like ‘Beti Bachao, Beti Padhao’, Ujjwala Yojana for free cooking fuel, initiatives like Pradhan Mantri Surakshit Matritva Abhiyan, financial inclusion through PM Jan Dhan Yojana, MUDRA scheme for entrepreneurial ambitions, Permanent Commission in our defence services are some of the notable interventions for not just the welfare for women but also empowering them.”

Jitendra Singh said that women are taking their well-deserved place in the society and we must do away with the past hangover of gender specified roles.

“Government has taken crucial steps like emergency cash transfer through Direct Benefit Transfer which is a great example of gender intentional policy. The government of India has been pushing forward from bottom up to build a gender equal country,” said Melinda French Gates, expressing hope that the Centre would work in co-ordination to achieve shared goals and improve the aspect of gender equality in the country even further.