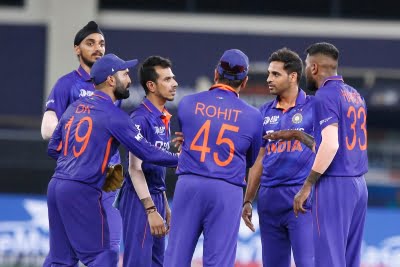 Dubai, Aug 28 (IANS) Bhuvneshwar Kumar and Hardik Pandya played starring roles with the ball as India bowled out Pakistan for 147 in 19.5 overs in their opening match of Asia Cup 2022 at the Dubai International Stadium on Sunday.

While Pandya got India vital breakthroughs with his short balls to pick 3-25 in his four overs, Bhuvneshwar was excellent in starting and death overs to take 4-26 as India used the bounce well offered by the pitch. With left-arm pacer Arshdeep Singh taking rest of two wickets, it also marked the first instance of Indian seamers taking all ten wickets in a T20I match.

Electing to bowl first, there was drama in the opening over. Mohammad Rizwan survived an early lbw call off Bhuvneshwar on the second ball via DRS. He had a reprieve again on the last ball of the over as India lost their review.

Captain Babar Azam oozed gorgeousness while straight driving with full face of the bat for a brace of boundaries through mid-off. In an attempt to pull off a Bhuvneshwar bouncer, Azam sent a top-edge to short fine leg.

Fakhar Zaman was off the mark with the very first ball, gloving a Bhuvneshwar short ball over keeper Dinesh Karthik for a boundary. He welcomed Pandya with a drive between mid-off and extra cover for another boundary.

Rizwan started to find his rhythm with two fours and whipping Avesh Khan over cow corner for an 87m six. But Avesh bounced back in final over of power-play, banging in short and got a faint tickle off Zaman’s bat through extra bounce to be caught by the keeper. Though India didn’t appeal, Zaman walked off, ruling himself out.

Post power-play, Iftikhar Ahmed got a brace of boundaries. But Pandya and spinners, Yuzvendra Chahal and Ravindra Jadeja, kept things tight as there was hint of turn on offer. In the ninth over, Jadeja bowled a short of a length ball to Ahmed, which turned from outside leg to beat his bat, surprising everyone with turn and bounce.

Rizwan cut through backward point off Jadeja for four while Ahmed heaved Chahal high over long-on for six as Pakistan tried to shift gears. But India halted that charge as Pandya sharply bounced out Ahmed and top-edge was caught safely by Karthik. In his next over, Pandya made a double strike with his short balls as Rizwan ramped straight to third man and cramped Khushdil Shah for room, forcing him to slash straight to cover.

Pakistan never recovered from three wickets lost in overs 11-15, as Asif Ali holed out on a slower off-cutter to long-off off Bhuvneshwar. Arshdeep came back to have Mohammad Nawaz nicking behind to Karthik.

Bhuvneshwar took out Shadab Khan and debutant Naseem Shah on consecutive lbws in the 19th over. But Shahnawaz Dahani smacked two huge sixes over leg-side before his stumps were disturbed by a quick Arshdeep yorker to put an end to Pakistan’s innings at 147.