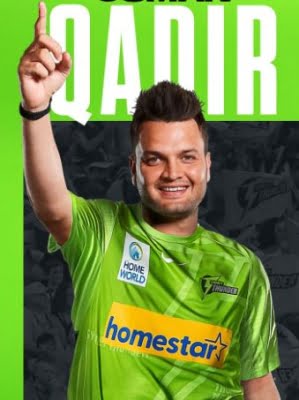 Sydney, Nov 29 (IANS) Big Bash League (BBL) side Sydney Thunder have included Pakistan’s T20I leg-spinner Usman Qadir in their bowling arsenal for the upcoming season. The 29-year-old will provide the Trevor Bayliss-coached Thunder with cover while rising star Tanveer Sangha recovers from the back stress injury that’s frustrated the start to his season.

Qadir, son of the late Abdul Qadir — one of world cricket’s greatest-ever exponents of leg-spin bowling –, will arrive to the Sydney Showground Stadium boasting an intimate knowledge of Australian playing conditions, said a Thunder statement on Tuesday.

Besides playing Premier cricket in Sydney and Adelaide, Qadir also represented Western Australia and the Perth Scorchers during the 2018/19 season.

After he declared his desire to represent Australia in the 2020 World T20 Cup, Qadir was selected to play in the Prime Minister’s XI which defeated a strong South Africa side in Canberra. He finished the four-wicket victory with an impressive 3-28.

“Qadir, who has since represented Pakistan in 23 T20 Internationals after gaining selection in 2019, has forged a reputation for having the ability to take wickets in the middle overs. His effort to take 4-13 against Zimbabwe is seen by many as his crowning performance on the international stage,” said the statement.

Sydney Thunder’s Andrew Gilchrist said Qadir, who was a reserve for the Pakistan team in the recently concluded T20 World Cup, would provide the team’s bowling attack with ‘experience’ and ‘sting’.

“Usman joins us with plenty of experience, having represented Pakistan, and playing in T20 leagues around the world,” he said.

“Importantly, he has first-hand knowledge of Australian conditions, he played for Western Australia and South Australia’s Futures League (2012-13), so he knows what to expect.”

“He’s also made it clear that he is proud his father re-invented the googly; I have read that he feels as though he’s its ‘custodian’. I hope he drives our opponents mad with his googly and other tricks this summer — it will provide extra sting to our attack.”