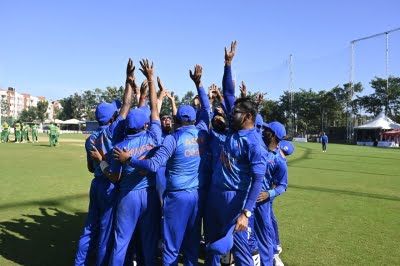 New Delhi, Dec 15 (IANS) Impressive all-round displays by Ajay Kumar Reddy and Sunil Ramesh enabled India to cruise past South Africa by 207 runs in the first semifinal of the 3rd T20 Cricket World Cup, which was played at the Samprasiddhi Sports Estadio Cricket Stadium in Bengaluru on Thursday and reach the final of tournament.

Sunil Ramesh smashed his second ton of the tournament and also chipped in with a wicket while Captain Ajay Kumar Reddy scored a quick fire 81 and also took 3 wickets. India will face Bangladesh, who beat Sri Lanka in the other semifinals by 64 runs, in the summit clash at the M.Chinnaswamy Stadium, Bengaluru.

Put into bat, India lost openers Lokesh and A. Ravi inside 4 overs when the score was 50. Ravi scored 30. Sujit Munda was dismissed in the 6th over after scoring 14 runs.

Sunil Ramesh was joined by Captain Ajay Kumar Reddy in the middle and both batters put on a huge partnership of 144 runs for the 4th wicket. Ajay was especially playing some aggressive shots. He raced to his half century with the help of 12 boundaries. He retired his innings while on 81 off just 29 balls with the help of 17 boundaries.

Sunil Ramesh, who had earlier scored his first century of the tournament against Nepal was in the mood and was punishing the South African bowling. He raced to his century and retired his innings at 110 off just 47 deliveries with the help of 17 boundaries and 3 sixes.

Vice-Captain D.Venkateswara Rao and wicket keeper Prakash Jayaramaiah scored quick runs to take the score past 300 for India. India finished the innings on 337/6. Prakash scored an unbeaten 22 runs off 12 balls and Venkateswara scored 18 off 6 balls. Issac Asanda Bidla and Bhule Bhidla took a wicket each for South Africa.

In reply, South Africa could never gather momentum for chasing a huge total. They were pinned back by the Indian bowling attack and lost wickets at regular intervals. They slumped to 67/8 at the end of the first half of the innings.

Ajay Kumar Reddy was the pick of the bowlers taking 3 wickets supported by Sunil Ramesh, Lokesh who took one wicket each. The Indians were also good in the field as they inflicted three run outs in the South African innings.

Bhule Bhidla and Lwande Bhidla put on some resistance in the 9th wicket but it was too late to salvage anything from the match. They put on a partnership of 53 runs. Lwande was eventually dismissed by Parveen Kumar Sharma for 23. Bhule Bhidla was the last man to be dismissed after scoring 33 runs by Sujit Munda in the penultimate ball of the innings.

In the other semifinal, Sri Lanka won the toss and elected to field. The game was reduced to 17 overs per side.

In form Bangla openers Salman and Md. Ashiqur Rahman were looking confident from the very first ball and played some excellent cricket. They made a huge opening wicket stand of 154 runs in 13.3 overs.

Ashiqur was dismissed for 70 runs from 46 balls with the help of 9 boundaries and 2 sixes. His opening partner Salman scored 61 runs off 39 balls which included 9 hits to the boundary. Bangladesh eventually finished their innings at 188/3 in 17 overs.

In reply, Sri Lanka made a good start with openers Suranga Sampath and Ruwan Wasantha playing aggressively. They raced to 37 in 3.2 overs but Suranga was run out which halted the momentum of the Lankan chase. T.D Sahan Kumara was dismissed soon in the next over by Ashiqur Rahman.

Chandana Deshapriya joined Ruwan in the middle and started to rebuild the chase but Ruwan was run out in the 8th over halting the progress of Sri Lanka.

Bangladesh picked up wickets at regular intervals and they were especially brilliant in the field running out five Sri Lankan batters. The Sri Lankan chase ended in the 15th over with the score reading 124. Ruwan top scored for Sri Lanka with 24 runs. Ashiqur Rahman took 2 wickets while Tanzil, Abid and Mahmud Rashid took a wicket each.

The finals of the tournament will be played on Saturday at the M. Chinnaswamy Stadium, Bengaluru.