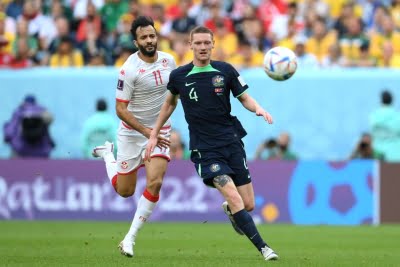 In the Group D match played at Al Janoub Stadium on Saturday, Duke produced the only goal of the match in the 23rd-minute strike and helped the Socceroos’ to collect their first points of the football showpiece event.

The Socceroos’ had to withstand some late pressure to secure a win and head into their final Group D clash with Denmark with all to play for. The win ended Australia’s seven-match winless run and claimed their first FIFA World Cup win in over 12 years.

Coach Graham Arnold’s team had fallen to defending champion France in their first match losing 4-1, after having scored the first goal of the match, only to find their defense caved in four times in the match against the rampaging Frenchman.

As they did against France, Australia started brightly here and went into the early lead deservingly. There’s an air of confidence in their game and they were moving the ball along well.

Tunisia had their first chances, when Issam Jebali made a good run, finding Youssef Msakni with a pass. Crowded out by Aussie players, Msakni could not get a shot away and the ball ran out of play.

Tunisia coach Kadri was left frustrated for a large part of the match except for the last few minutes where the North Africans threw everything they had at their disposal to secure the equalizer.

Tunisia looked more comfortable on the ball against the technically better Denmark but they let Australia control the flow of the game, which did not go well with Kadri.

Australia dominated for more than half an hour, having 51 percent ball possession and seven shots compared with Tunisia’s four. The Socceroos’ looked more energetic and determined for much of the first half and deservedly took the lead through Duke who notched his ninth national team goal and the 50th of this tournament.

Tunisia, who were roared on by another passionate and highly vocal support, toiled tirelessly in search of an equalizer but often lacked composure and inspiration in the final third.

Australia defended heroically, too, no one more so than Harry Souttar. The giant Scotland-born defender earned hugs and high fives from his teammates late in the first half when he threw himself to block from Mohamed Drager with a goal seemed inevitable.