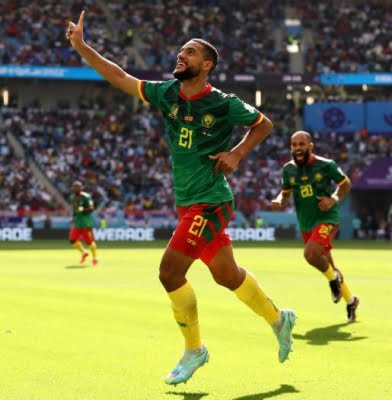 With the draw, arguably the most exciting game of the World Cup in Qatar so far, Cameroon kept their hopes alive of reaching the World Cup last 16 Stage.

Both sides lost their opening match so the result leaves them two points adrift of Brazil and Switzerland, who meet later on Monday.

The winner of Monday’s late match qualifying for the next stage, having won their respective first round matches against Cameroon and Serbia respectively.

It now all goes down to Friday matches with both teams needing a win from their next match, with Brazil next up for Cameroon, and Switzerland facing Serbia.

It was a classic intercontinental encounter and a great contest between two different styles. It looked to be Serbia’s game but Cameroon got better and stronger as the game went on and no one knew right up until the last few seconds who would take three points, in the end the 3-3 draw was a fair reflection of the thrilling game.

Serbia started brightly and Mitrovic twice went close to giving his side the lead. The Fulham striker struck the post inside the first ten minutes, setting the tone for a match that would soon turn into a goal-packed blockbuster.

However, Cameroon took the lead much against the run of play when Nicolas N’Koulou flicked on a corner and Castelletto tapped home from close range for his first international goal in the 29th minute.

Serbia did not panic though and turned the game on its head in first half stoppage time.<br>Two quick goals from Strahinja Pavlovic and Sergej Milinkovic-Savic just before the break saw Serbia head into half-time with a 2-1 lead.

Aleksandar Mitrovic then added a third in the 53rd minute in what would be any coach’s delight as Mitrovic finished off a brilliant Serbia passing move to give them a two-goal cushion and Dragan Stojkovic’s side looked to be heading for a comfortable victory.

But Cameroon had other ideas and staged a remarkable second-half comeback. The Indomitable Lions bounced back, scoring twice to level.

Substitute Vincent Aboubakar scored an outrageous lob that was initially ruled offside until VAR intervened to award the goal for Cameroon in the 63rd minute.

Aboubakar raced clear and, perhaps thinking he was offside, cut inside past a defender and casually scooped the ball over Vanja Milinkovic-Savic for one of the tournament’s best goals, 3-2.

Two minutes later the striker again beat the offside trap but this time Aboubakar drove down the right and passed it to Eric Maxim Choupo-Moting who equalized to make it 3-3.<br>The suspense continued for the remainder of the match with Serbia coming close to scoring when Mitrovic curled a shot wide in the closing moments after being fed up by Dusan Tadic.