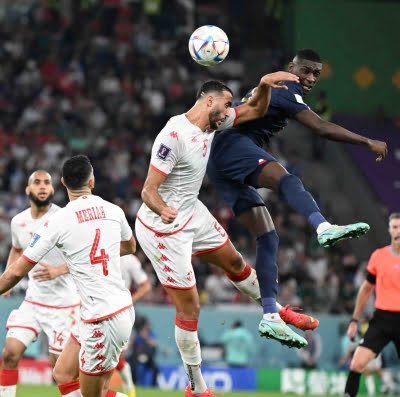 Khazrei’s goal went in vain as the Socceroos’ made it at the expense of the North Africans from Group D.

At the Janoub Stadium, Australia defeated Denmark 1-0 and made it to the knockout stage from the group along with France.

France started the World Cup in fine fashion, picking up six points from their first two games and scoring six goals in the process and inspite of Wednesday’s loss to Tunisia finished as group leaders ahead of Australia.<br> <br>Both Australia and France finished with six points from two wins, while Tunisia took the third spot with four points from one win and one draw against Denmark, which finished at the bottom with one point.<br> <br>Australia join already qualified teams France, Portugal, Brazil, Senegal and The Netherlands and will take on winners of Group C, which consists of Argentina, Poland, Mexico and Saudi Arabia.<br> <br>On Wednesday, two other matches will see Argentina take on Poland and a winless Mexico taking on Saudi Arabia.<br> <br>At the Education City Stadium on Wednesday, France having already qualified for the last 16 stage opted to rest a number of players, including Hugo Lloris, Kylian Mbappe and Olivier Giroud.<br> <br>Taking a cue, the Tunisians dominated the major chunk of the opening session.<br> <br>The Tunisian continued to call the shots for the major part of the second session with France making a spirited charge late into the match to secure the equaliser but without success.<br> <br>Khazri struck 13 minutes into the second session. Youssouf Fofana lost the ball in midfield for France and the ball went to Khazri 30 yards from goal, he moved deep into the rival territory and dribbled into the box almost unchallenged, before slipping the ball past Steve Mandanda, 1-0.<br> <br>It was only the introduction of Antonie Griezmann and Kylian Mbappe that injected some energy into the French attack.<br> <br>In fact Griezmaan, the Athletico Madrid man had volleyed home from 10 yards to put the teams on level terms but the goal was ruled out following VAR review.<br> <br>The huge contingent of Tunisian fans welcomed the decision with a big roar as the Kiwi referee Matthew Conger overturned the last-minute equalizer.<br> <br>Tunisia have held on to record an against-the-odds to claim a memorable 1-0 win but The Eagles of Carthage will not progress to the last 16 due to Australia’s victory over Denmark in Group D’s other final fixture but will take solace from this upset against the 2018 champions.<br>