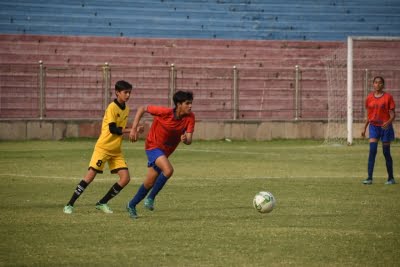 Aveka Singh’s four goals were the highlights of the quarter-final match played at the Dr Ambedkar Stadium. Karen Pais netted two while Savi Mehta, Anushka Samuel, Deepika Venkatesh scored one goal each for the winners. Thielalnei got one for the Sudeva Delhi FC.

Hops FC also advanced to the semi-final stage by defeating Garhwal Women FC 6-1 in the second quarter-final of the day. Santosh (2), Poonam Rani (1), Sunita (1), Jyoti (1) and Karuna (1) were the goal-scorers for the winners. Anjana Thapa scored the solitary goal for the losers.

Sonia Marak, K Margaret Devi, Sainjali Kemprai and Karishma Rai scored one goal each for the winning team. Asha Thapa shot one back for the losers.

Growing Stars SC edge past Hindustan FC 5-3 in the shootout to stay in the race for semifinal berth. Himanshi, Pariksha, Varsha, Sapna and Jyoti were on the target for Growing Stars while Frooti, Anju and Ankush scored for Hindustan FC team.