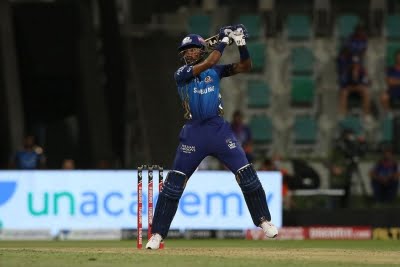 Chennai/Mumbai, April 19 (IANS) Hardik Pandya’s shoulder niggle seems to have turned out to be a blessing in disguise for the Indian team since due to the injury they have been able to discover a close-in fielder.

Hardik, who would normally field in the outfield has been put inside the 30-yard circle where he has excelled. Against SunRisers Hyderabad (SRH), he got two direct hits to get David Warner and Abdul Samad at moments when SRH were either in dominant position or making a match of it.

Both run outs proved crucial as MI won the match by 13 runs.

Hardik’s evolution as close-in fielder has provided India with strong options in the 30-yard circle.

With Ravindra Jadeja already established as a great fielder in the circle, India’s fielding in the circle will be a joy to watch and something similar to what it was when Yuvraj Singh and Mohammed Kaif would field.

Jadeja had on Friday caught Punjab Kings (PBKS) by surprise as he dismissed KL Rahul with a direct hit while having a single stump to aim at from backward point. Jadeja then took a diving catch of Gayle at backward point to leave PBKS struggling at 19/3 and a position from where they could never recover.

PBKS head coach Anil Kumble shook his head in astonishment and pace bowler Deepak Chahar later said he would love to have 11 Jaddus (Jadejas) in the line-up.

Mumbai Indians head coach Mahela Jayawardene too was impressed with the way Hardik has turned up as a fielder.

“We have always used Hardik on the boundary, because of his speed, throwing arm and catching ability. He has had niggle in the shoulder for the last few games so we kept him in the 30-yard circle and he proved his value by picking run-outs because he is agile. He is a good mover between short distances. Obviously it is great. Probably going forward, we will make him stay longer inside the circle before sending him out,” said Jayawardene while speaking to the media.