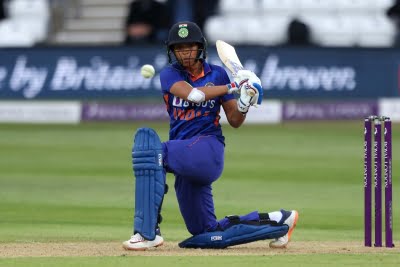 London, Sep 25 (IANS) India women’s team captain Harmanpreet Kaur has backed her bowler Deepti Sharma for running out England’s Charlie Dean at the non-striker’s end during her delivery stride in the third and final ODI at Lord’s on Saturday, calling it a “part of the game”.

Freya Davies and Charlie Dean put on 35 runs for the final wicket, helping England from 118/9 to within sniffing distance of India’s target of 169 before Deepti ran the England batter out before delivering the ball at the non-striker’s end to seal India’s win.

While the dismissal garnered attention from all quarters, according to the updated ICC Playing Conditions, “running out of the non-striker” has been moved from the “Unfair Play” section to the “Run out” section.

With 17 runs required, the 10th wicket partnership between Davies and Dean seemed to be helping England edge closer to the winning target. But drama soon unfolded at Lord’s with Deepti running Dean out at the non-striker’s end in her delivery stride.

Asked about the dismissal at the post-match presentation ceremony, Harmanpreet played down the controversy surrounding the dismissal, saying Deepti “hasn’t done something outside the rules”.

“To be honest, I thought you will ask about all the 10 wickets, which was not easy to take as well (when asked about the dismissal),” Harmanpreet was quoted as saying by ICC.

“It’s part of the game I don’t think we have done something new. It shows your awareness, what batters are doing. I will back my players; she (Deepti) hasn’t done something outside the rules. At the end of the day a win is a win and we will take that.”

The wicket gave India a 16-run victory with Dean nearly taking the game out of their hands with her knock of 47 that helped England recover from a despondent 65/7 in the run chase.

Hailing Jhulan Goswami, who was playing her last international game, Harmanpreet referred to the senior pacer as her “go-to person”.

“When I debuted she was a leader, before the game I told her when I was going through the best time people supported me but when I was in a rough time she was the one who supported me,” the India captain added.

“I wanted to thank her and tell her she is always with us. She is a go-to person, I always called her at low times and she was someone always guiding me.”