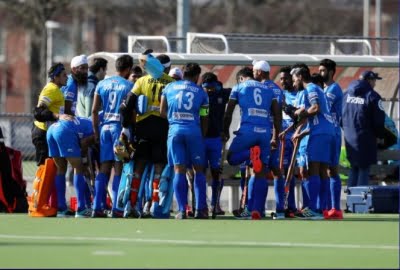 Buenos Aires, April 6 (IANS) India were off to a flying start, getting the better of Olympic champions Argentina 4-3 in the first practice match on Tuesday. Goals from Nilakanta Sharma (16th min), Harmanpreet Singh (28th), Rupinder Pal Singh (33rd) and Varun Kumar (47th) gave the tourists a head-start ahead of the back-to-back FIH Pro League matches on April 11 and 12 in Buenos Aires.

For Argentina, drag-flicker Leandro Tolini (35th and 53rd) and Maico Casella (41st) were on target.

After a sedate first quarter, Shilanand Lakra’s immaculate assist to Nilakanta Sharma helped him put the ball past Argentina’s goalkeeper. An early lead secured, India pushed the hosts on the back-foot waves of attack. Though the hosts replied to India’s aggressive show by securing a penalty corner midway through the second quarter, experienced goal-keeper PR Sreejesh was brilliant in his saves.

India set up another scoring opportunity when Dilpreet Singh earned the visitors a penalty corner in the 28th minute and Harmanpreet made no mistake in his attempt, making it 2-0.

Argentina made a strong comeback in the third quarter, scoring in the 32nd minute via Leandro Tolini, who deftly converted a penalty corner. India quickly responded, winning a penalty corner in the very next minute through Jaskaran Singh. This time it was experienced drag-flicker Rupinder Pal Singh who struck a brilliant goal, a 3-1 lead.

Argentina, however, ended the quarter with a goal in the 42nd minute through Casella. Though they vied for the equaliser by earning another penalty corner soon after, young India goalkeeper Krishan Pathak was alert to the threat.

The final quarter was tense but India put up a resolute fight to stay in the lead till the final hooter. In the 47th minute, Dilpreet Singh set up a fine penalty corner, which was well-struck by Varun Kumar, who returned recently to the team after a long injury layoff.

Though Argentina’s Tolini scored in the 53rd minute to reduce the margin, the visitors’ spirited defence till the end thwarted the hosts.

India will play their second practice game on Wednesday. Indian is scheduled to play six matches against Argentina during their 16-day tour, including the double-header FIH Hockey Pro League matches on April 11 and 12.