Men's T20 World Cup: A look at other pace options for India in Jasprit Bumrah's absence 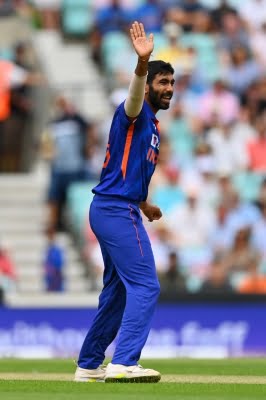 New Delhi, Sep 30 (IANS) As of now, there is a lot of uncertainty and confusion over the availability of India pace spearhead Jasprit Bumrah for the Men’s T20 World Cup, starting next month in Australia.

Some media reports state that Bumrah has a serious stress fracture in the back, which will keep him out of the game for four to six months. On the other hand, there are some speculations which say that the pacer might just make it to the World Cup if his recurrence of back injury may not be serious in nature and requires healing time of four to six weeks.

With the changes to squads subject to the approval of International Cricket Council (ICC) can happen till October 15, India still have some arsenal in their pace attack and have time in hand to see how can the big gap left by Bumrah’s potential absence be filled by the other Indian pacers.

IANS looks at the Indian seamers who are in World Cup squad as well as in the reserves, and could earn a promotion to the main squad if Bumrah is not available for the mega event:

With an experienced hand like Bumrah in doubt for World Cup participation, it now makes it difficult to look past Mohammed Shami for the T20 World Cup. For starters, Shami hasn’t played a T20I for India since they crashed out of the Super 12 stage of the Men’s T20 World Cup in the UAE last year.

Post that, India have played Bumrah, Harshal Patel, Bhuvneshwar Kumar, Avesh Khan, Arshdeep Singh, Deepak Chahar, Mohammed Siraj, Umran Malik, Umesh Yadav and Shardul Thakur as pace options in T20Is (including Hardik Pandya, who’s an all-rounder to chip in middle overs), but Shami was not given a look-in at all.

Though Shami was named as one of the reserves for the T20 World Cup and included in the six T20Is at home against Australia and South Africa respectively, he missed out on both due to being infected with Covid-19.

The senior pacer has been one of the busiest bowlers in T20Is this year, picking 32 wickets in 24 matches at an average of 17.56 and economy rate of 7.21. Though he earned Player of the Series awards in series against South Africa and England on the back of his strikes upfront, Bhuvneshwar’s death bowling has emerged as a late concern.

He has conceded 16, 14 and 19 runs in matches against Pakistan, Sri Lanka and Australia in the 19th overs. Asked to bowl the 18th over against Australia at Hyderabad, Bhuvneshwar went for 21 runs. In his line and length, the control has been missing with lots of full tosses making appearances while the slower deliveries haven’t been effective as well.

If Shami comes into the squad as Bumrah’s replacement, then the powerplay bowling duties will be divided between him and Bhuvneshwar. It also means that either of the two, who are expensive death overs bowlers, will have to shoulder the responsibility. With the first match against Pakistan nearly three weeks away, India need Bhuvneshwar at his best in death overs.

Seen as more of a back-up of Bhuvneshwar, Deepak Chahar is back into competitive cricket after an injury forced lay-off of seven months. Though the playing opportunities have been sporadic, Chahar had an outstanding spell with the new ball, picking two wickets with his famed swing bowling to reduce South Africa to 9/5 at Thiruvananthapuram.

Though Chahar had some death overs bowling to his credit while playing for Chennai Super Kings in IPL 2019 as well as in 2021 and his death overs economy rate in IPL overall stand at 8.42, he will be seen as more of a power-play specialist though he himself believes to do the job in death overs. Apart from his bowling, Chahar has the knack of hitting handy knocks with the bat too.

Apart from Ravi Bishnoi’s leg-spin, Arshdeep Singh has been one of the great finds for India in T20Is this year. Though he is seen as more of a death overs specialist due to his ability to land yorkers and hold his nerve, Arshdeep showed that he can be effective with the new ball too, seen from his triple burst in his first over at Thiruvananthapuram to break the back of South Africa’s innings.

In IPL 2022, while playing for Punjab Kings, he had an economy rate of 7.58, which was the second-best figures in the tournament after Bumrah’s 7.38. He also picked four wickets during that phase where there were very few runs to defend.

With his left-arm angle, Arshdeep brings the exuberance of youth and variety to the Indian pace attack. Though he has never played in Australian conditions before, expect the youngster to adapt quickly to the surroundings on ground and step up to the challenge if Bumrah isn’t there.

Emerging as a key player for India since his debut in November last year post superlative performances in the IPL, Patel has been known for his accuracy and hard to read slower balls as well as a dipping yorker apart from smashing big hits with the bat.

But since his return after recovering from a rib injury, Patel is yet to be at his best. In the series win over Australia, he picked just one wicket in three matches, leaking 99 runs at an economy rate of 12.37, including 22 runs in the 18th over.

Though he picked 2/26 against South Africa at Thiruvananthapuram, one would be keen to see if his slower balls and dipping yorker can work on Australian pitches during the middle as well as the death overs.

Earlier, on Friday, the All-India Senior Selection Committee named Mohd Siraj as replacement for injured Bumrah for the remainder of the T20I series against South Africa. And it will be interesting to see if he will be able to make it to the World Cup squad too.

His performance in the remaining two matches against Proteas and Bumrah’s fitness will be monitored closely by the selectors.