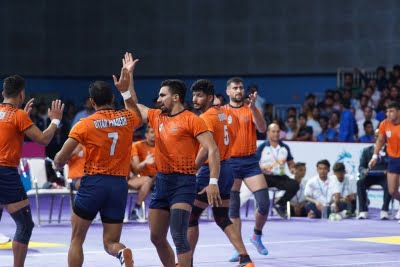 Ahmedabad, Oct 1 (IANS) Uttar Pradesh and Maharashtra played a nail-biter of a match, but eventually, U.P held their nerve and emerged as the champions of the men’s kabaddi competition at the 36th National Games Gujarat 2022 here on Saturday.

The two teams were winning points in tandem until Pro Kabaddi League (PKL) star Rahul Chaudhari put up a spirited performance in the last minute of the match to help his team win the title.

The Maharashtra defense unit consisting of Shankar Bhimraj Gadai, Mayur Jagannath Kadam, Arkam Shaikh and Kiran Magar consistently carried out tackles and helped their team take the lead at 7-5 in the 10th minute.

Moments later, Pankaj Mohite tried to step up for his team, but the Uttar Pradesh defense unit, which had PKL players Sahul Kumar and Harendra Kumar tackled him quickly to stay in the game. U.P raiders Rahul Chaudhari and Abhishek Singh kept their team in the game as the two sides went into the break with Maharashtra leading at 11-10.

The PKL player Mohite upped the ante in the second half and extended Maharashtra’s lead to 14-10 with a stupendous raid. Another PKL star Aslam Inamdar tried to tackle Nitin Tomar, but the latter managed to cross the line and earn a point for Uttar Pradesh. However, Maharashtra still stayed in the lead at 18-17 with the help of Akash Santosh Shinde in the 33rd minute.

The tide turned in Uttar Pradesh’s favour when PKL star Chaudhari inflicted an All Out and helped his team take the lead at 23-20. However, Mohite stood tall for Maharashtra and levelled the scores at 23-23 through a fantastic raid.

Thereafter, Chaudhari won a crucial bonus point and the U.P defense unit backed him up with a brilliant tackle as the team put their noses in front at 25-23. Uttar Pradesh rode the momentum and eventually clinched the men’s kabaddi title at the 36th National Games Gujarat 2022.