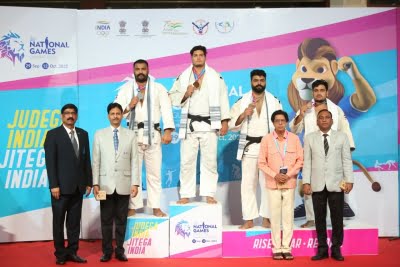 Ahmedabad, Oct 10 (IANS) Maharashtra’s Mallakhambh stars, led by the reigning queen Rupali Sunil Gangwane, swept three of the five gold medals at stake on Monday to take their state to the second position on the medal table, ahead of Haryana for the first time in several days, in the 36th National Games.

The windfall has increased Maharashtra’s gold-medal tally to 34, leaving Haryana behind with 32 after a long and intense battle between the two giants.

Significantly, with a total of 126 medals, including 36 silver and 56 bronze, Maharashtra have the biggest haul in the Games. Services continue to lead with 53 gold, 33 silver and 29 bronze but have a lower aggregate of 115 medals. Haryana’s 32 gold, 30 silver and 38 bronze made them the third to touch the 100-medal mark.

In the final rush for medals, Gujarat’s boy wonder, 10-year-old Shauryajit Khaire, created history, becoming the youngest medallist of the Games when he clinched the bronze medal in Pole Mallakhamb.

The hosts had another good day, with Pooja Patel teaming up with Komal Makwana to clinch her second Yogasana gold medal. They also picked up the men’s and women’s singles bronze medals in Soft Tennis to take their own medal tally to an impressive 43, including 13 gold, 12 silver, and 18 bronze with two more days of competition left.

Maharashtra’s Rupali Gangawane came up with a clinical performance to claim her third gold medal at the Sanskardham Sports Academy facility in Godhavi. She took top honours in the Women’s Rope competition (9.25 points) on Monday, to add to the Individual All-round gold and Team gold she had won on Sunday.

She also won a bronze in the Pole competition to be among the handful of multiple medal winners in the Games. Madhya Pradesh’s Sidhi Gupta took the Pole with 9.10 points.

Akshay Prakash Taral, the men’s All-round champion, added a second gold to his collection by winning the Rope competition with 8.95 points. His team-mate Shubhankar Vinay Khawle scored 9.20 points on the Pole to win the other gold for Maharashtra, preventing a Madhya Pradesh sweep.

There was massive disappointment for the Maharashtra men’s hockey team who were unable to make the most of their pre-match favourites tag against Uttar Pradesh in the semifinals at the Maj. Dhyan Chand Stadium in Rajkot. Maharashtra rallied from three goals down to take the match into the penalty shootout but ran out of luck there.

Karnataka will take on Uttar Pradesh in the final. They struck in the first and the fourth quarter to pull off a convincing 3-1 win over Haryana in the other semifinal.

Abharan Sudev converted Karnataka’s first penalty corner in the fourth minute but Haryana hit back through Kohinoor Preet Singh in the 17th minute. After a barren third quarter, Karnataka scored through Nikkin Thimmaiah (47th minute) and Harish Mutagar (51st) to seal their place in the summit clash.

The Softball competition at the IIT Gandhinagar is also heading for a climax, with the Maharashtra men and Punjab women’s teams booking their places in the respective finals by beating squads from Chhattisgarh in the playoff games.

The Chhattisgarh teams will now feature in the qualifiers against second-placed finishers in the pools.

Andhra Pradesh, who beat Delhi 4-0 in the men’s eliminator, and Kerala, who edged out Maharashtra 4-3 in the women’s match, will both hope to stun Chhattisgarh and earn themselves a crack at the gold medal in the respective finals.

It was heartening to watch the experienced Rajina Kiro hold her own in the women’s K1 500m sprint against Kaushal Nandini Thakur (Chhattisgarh) and Pooja (Haryana).

Sumit, a quarterfinalist at the World Championships, beat Haryana’s Ankit Khatana in the men’s 75kg bout while Sanjeet used his long reach in the 92kg category to make short work of Delhi’s Harsh Kaushik.

Assam’s Jamuna Boro registered a dominant victory against Sapna Sharma (Rajasthan) in the 57kg class. Battling high fever for the past three days, Jamuna did not show any signs of fatigue in the ring as she registered a 5-0 win.