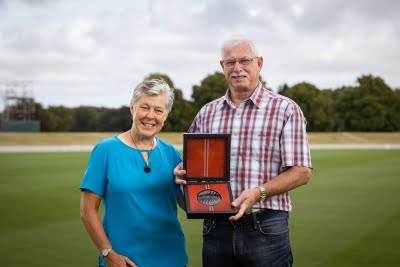 The newly-minted honour, to be afforded equal status to the Sir Richard Hadlee Medal for the outstanding male cricketer of the year, is to become a regular event at the New Zealand Cricket Awards, to be hosted this year on March 23 in Auckland.

Debbie, regarded as one of the world’s best batters during her playing days and one of the finest to have played the game, played 118 ODIs and 19 Tests for New Zealand from 1979 to 2000. She will present the new award in person on the awards night.

Debbie is the only woman to have won the supreme New Zealand Cricketer of the Year Award, having been honoured in 1998, 13 years before it was changed to the Sir Richard Hadlee Medal. She expressed her delight at having her name associated with the new award.

“I feel honoured, personally, of course – but also thrilled that the country’s outstanding women’s cricketer of the year will be recognised on an annual and ongoing basis. It’s been wonderful to watch the progress of the women’s game in New Zealand over the past five or six years and this is another very positive development.”

“Women’s cricket is going from strength to strength; the growth at all levels has been amazing. I’m looking forward to presenting this award to the inaugural recipient in March,” she said in an official statement.

Debbie was the fourth woman to be inducted into the ICC Hall of Fame after Belinda Clark (Australia), Enid Bakewell and Rachael Heyhoe-Flint (England). In the Test arena, she scored 1301 runs at an average of 52.04, including four centuries, seven half-centuries and a top score of 126 not out against Australia, at Auckland in 1990.

She also scored 4064 runs in ODIs at 41.89, including four centuries, 34 half-centuries – while taking 54 wickets. She was the first woman to eclipse 4000 ODI runs, and also the first to play 100 ODIs. Across both formats, she captained New Zealand on 33 occasions.