Sakariya: From struggling to meet cricket expenses to IPL stardom 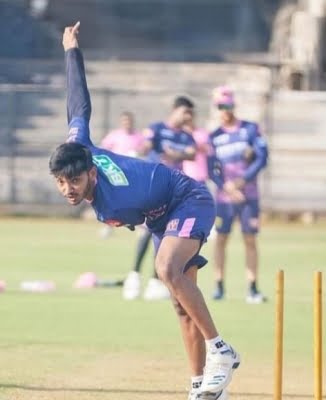 New Delhi, April 13 (IANS) Rajasthan Royals pace bowler Chetan Sakariya has overcome many hurdles in his life like working at his uncles stationery shop while in school in lieu of money to cover his cricket expenses as his father couldnt afford equipment and coaching fees. Earlier this year, he and his family overcame the death of his younger brother, who had committed suicide. These have been harsh enough tests to endure early in life, especially for someone whos just turned 23.

So it wasn’t surprising to see him maintain composure and calmness while bowling a series of slower balls in the last over on Monday night against Punjab Kings bowling innings and deceiving the batsmen while conceding five runs and picking two wickets.

RR director of cricket operations Kumar Sangakkar was all praise for the left-arm youngster from Saurashtra.

“I think he (Chetan Sakariya) was just brilliant. His skill was on display. It was really wonderful to watch a bowler in such a high-scoring match always smiling, always in the game. He took an amazing catch at short fine leg. He managed to come back well with the new ball. He bowled at the death, when everyone was taking punishment,” Sangakkara said while speaking to the media after the match on Monday.

“It speaks a lot about his skill, his attitude. It is great to have him in the side. He is a simple guy. He has had his ups and downs in life. He is here to enjoy his cricket. Our job is to support that. It was really good to see the control that he had, the change-ups. He picked the moments to bowl them,” added Sangakkara.

Sakariya was picked for Rs 1.2 crore in the IPL mini-auction on February 18 this year.

Coming from a village, 10 kilometres from Bhavnagar in Gujarat, life wasn’t easy for him.

His maternal uncle took care of his expenses for education, cricket equipment, and training at the Sir Bhavsinhji Cricket Academy, a go-to place for budding cricketers in and around Bhavnagar, and from where the likes of Saurashtra players Sheldon Jackson, Harvik Desai, and Sandip Maniar have emerged.

In return, Sakariya had to help him in his business.

Sakariya’s dad, who owned and drove a tempo, took care of the family with his meagre income.

“When I was in school, I had to balance studies and cricket. But after completing my 12th I focussed on cricket. I would train in the evening and in the first half, I would work for my uncle,” Sakariya had told IANS just after getting picked at the auction.

Sakariya was initially encouraged by his school coach when he was in 10th and immediately enrolled into the Bhavsinhji Academy. From there, he got a chance to play under-16 for Saurashtra.

He was then picked for MRF Pace Foundation and spent five months there on his action and fitness.

“I played for the Saurashtra under-19 and also the under-23 teams. Soon, I was called up for the senior team’s probables and was put in the loop. The coaches said that with experience I would improve,” he had told IANS.

Having bowled at the senior Saurashtra team nets, he made his Ranji Trophy debut in November 2018 against Gujarat and he picked a five-wicket haul in first innings as Saurashtra won points on first innings. He picked 29 wickets in eight matches in his debut Ranji season.

But it was his bowling in T20 format that was to catch everyone’s eye.

During the 2019-20 Syed Mushtaq Ali Trophy, he impressed the Royal Challengers Bangalore scouts.

“I was approached by the RCB scouts when I was playing a T20 match against Jharkhand. They called me for trials in January, just before Covid-19 broke out. Coach Mike Hesson was impressed. They gave me match scenarios at the nets and I impressed them. Unfortunately, a lockdown happened. But they kept in touch and signed a contract with me,” Sakariya had told IANS.

Sakariya soon flew to the UAE for IPL 2020 as a net bowler for RCB and that is where his brush with someone from the big league came.

South Africa pace bowler Dale Steyn and Umesh Yadav were at the nets.

“Steyn taught me a lot of things related to planning out batsmen. He taught me how to come round the wicket to a left-handed batsman and bowl wide outside off-stump. It is a very difficult job for a left-armer. I got Moeen Ali out in an intra-RCB practice game,” added Sakariya.

“Umesh bhai also taught me how to plan. My skills in variation were developed at the RCB nets during IPL 2020.”

The brush with the Steyn & Co at the RCB nets bore fruit at the Rajasthan Royals trials.

“I bowled extraordinarily well at the Rajasthan Royals trials just recently. One of the coaches came up to me and praised me for having different types of deliveries. I think I have six different variations — back-of-the-hand, bouncer, yorker, cutter, and slow bouncer etc, but I bowl two-three perfectly. That performance and in the Syed Mushtaq Ali Trophy is what I think got me a big contract,” said Sakariya.

He bagged 12 wickets in five matches that put him sixth in the wicket-takers’ list of the Syed Mushtaq Ali Trophy.