SRH bowl out Punjab Kings for 120 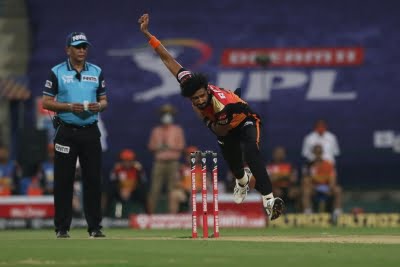 Chris Gayle and Mayank Agarwal tried to resurrect the innings but two successive wickets — of Agarwal, who was caught at mid-wicket, and Nicholas Pooran, who was run out — set them back.

Soon dangerman Gayle was out leg-before to Rashid Khan (1/17 in four overs) as PBKS were reduced to 47 for four in the ninth over.

The hopes of a recovery rested on the shoulders of Deepak Hooda (13 off 11) and Moises Henriques (14 off 17) but both couldn’t build on the start and fell to the left-arm spin of Sharma with the Aussie getting out stumped.

Shahrukh Khan (22 off 17) tried to take PBKS to a respectable total but he was caught at deep mid-wicket on the first ball of the penultimate over. With his departure, the hopes of PBKS reaching close to 140 were dashed.