Stoinis not to be formally charged for questioning bowler's action 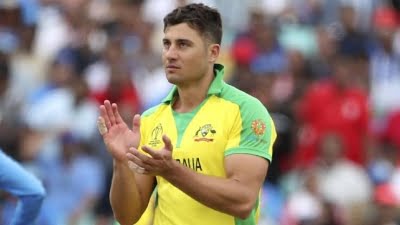 London, Aug 15 (IANS) Australian cricketer Marcus Stoinis may have drawn flak for apparently questioning the legality of Mohammad Hasnain’s bowling action during a match in The Hundred but the Australian all-rounder will not face any formal sanction for his transgression.

Playing for Southern Braves against Oval Invincibles, Stoinis was surprised by a quicker one by Hasnain and was caught at mid-off during Brave’s seven-wicket defeat on Sunday.

While walking back to the dugout, Stoinis mimicked a bowling action with a throwing motion.

However, on Monday, ESPNCricinfo reported that though Sotinis was spoken to by match referee Dean Cosker, he will not be formally charged with a breach of the disciplinary code of the England and Wales Cricket Board (ECB).

On social media, Stoinis was widely criticised for his attempt to question the legality of Hasnain’s bowling action.

“This is shocking! Hasnain has been cleared & it has nothing to do with Stoinis,” wrote former player Azeem Rafiq on Twitter.

“Who does Marcus Stoinis think he is? He got dismissed by Mohammad Hasnain tonight in #TheHundred and he went off signaling as if Hasnain was chucking! Disrespectful, really! If you can’t play him, you know where the dressing room is. You’re not Ricky Ponting, pipe down!” wrote a cricket fan on Twitter.

Hasnain returned to cricket in June after re-modelling his action after he was called for chucking during a match in Australia’s Big Bash League (BBL).