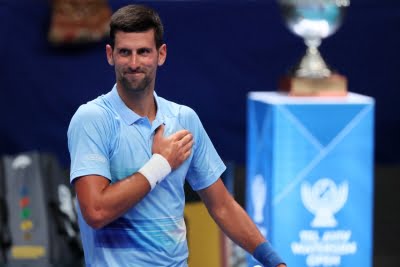 Tel Aviv (Israel), Sep 30 (IANS) Novak Djokovic overcame a tough test from Vasek Pospisil on Friday at the Tel Aviv Open, beating the Canadian 7-6(5), 6-3 in an entertaining quarterfinal clash to reach the semifinals of the tournament, here.

With his victory, the Serbian maintained his perfect record against Pospisil. He has improved to 6-0 in their ATP head-to-head series, having won all 13 sets they have played.

“It was a great, positive win. Vasek is one of my best friends on the Tour. We have known each other for many years. It is never easy playing someone you respect so much and like so much, but we are both professionals and wanted to win the match and you can see that,” Djokovic said in his on-court interview.

“I think the level of tennis was really high. Especially towards the end of the first set and the second set. Credit to him for fighting. Great to see him back,” he added.

The top seed, who is competing in just his second tour-level event since he triumphed at Wimbledon in July, showcased great athleticism to hang in points during the first set. He then hit with consistency in the second set to force the 32-year-old into errors and advance after one hour and 53 minutes.

The 35-year-old is seeking his third tour-level title of the season this week after winning trophies in Rome and Wimbledon. Djokovic will next play Roman Safiullin after the 25-year-old downed Frenchman Arthur Rinderknech 6-4, 6-1 in 69 minutes.

Reigning Wimbledon champion Djokovic is 15th in the ATP Live Race To Turin and, as a current-year Grand Slam champion, will qualify for the ATP Finals (13-20 November) provided he remains in the Top 20.