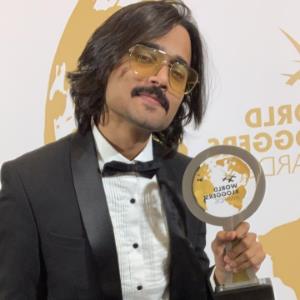 As the red carpet rolled out in Cannes for the first ever World Blogger Awards, Bhuvan Bam Of Popular Indian YouTube Channel – BB Ki Vines made his smashing debut on it. The awards premiered on 24th May in Cannes at Hotel Martinez where in Bhuvan won the ‘Global Entertainer Of The Year 2019’ award for his excellent contribution to digital entertainment.

Bhuvan was one of the three Indians to be nominated for the awards. He was seen walking the red carpet in a Giovani Tuxedo, Lenskart glasses and his quirky confident personality and he also walked the red carpet at the Festival De Cannes.

Ecstatic on winning the award, Bhuvan expressed, "I feel extremely happy and proud to win 'Global Entertainer Of The Year' on such a huge forum. This award rewards all of my hard-work and perseverance and I dedicate it to my BB Ki Vines army for always believing in me and never giving up. Onward and upwards now!"

Twitter
Flip
Koo
Previous article
Kiara Advani to play lead in her next movie
Next article
Sanya Malhotra stuns everyone in boss lady avatar!
This May Also Interest You
Sports