Mumtaz: A rare star who graduated from being an extra 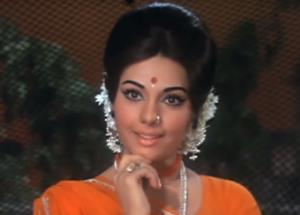 Her story indeed is an example of a commoner by her sheer guts and some good help from the colleagues to reach the dizzying heights of success. The stepping stone to success was provided to her by Late Dara Singh who acted along with her in 16 films, and 10 of these films were super hit. When she was paired with Dara Singh she used to get a remuneration of Rs. 2.5 lakh, while her co-star Dara Singh used to get Rs. 4.5 lakh. The on-screen association between Mumtaz and Dara Singh culminated into family relationship when Mumtaz's sister got married to younger brother of Dara Singh.

She really came into her own when she did the role of the vamp in that song, which still is considered one of the most enticing songs- 'Ye Hai Reshmi Julfo ka Andhera' from the film MERE SANAM, which was followed by 'Ek Dushmane Jaan' from the film PATTHAR KE SANAM. But these were the roles of vamps that she was enacting and she needed a break to graduate to the main league. The break came in the form of RAM AUR SHYAM where she was paired opposite Dilip Kumar and it was followed by TERE MERE SAPNE as a co-star with Dev Anand. As a matter of fact she did one more film with Dev Anand, HARE RAMA HARE KRISHNA.

But she still was looking for a superhit film that could catapult her to the main league and it came in the form of DO RAASTE with Rajesh Khanna and after that Mumtaz never looked back and went on to star with Rajesh Khanna in eight superhit films that are milestones of commercial success in the world of Hindi cinema including, AAP KI KASAM, ROTI, PREM KAHANI, SACHCHA JHOOTHA, DUSHMAN, APNA DESH etc.

There was a time when Shashi Kapoor had refused to work with her but with the success that she had achieved, he requested her to star opposite him in CHOR MACHAYE SHOR. In the same way when she was cast opposite Jeetendra in BOOND JO BAN GAYE MOTI, by V. Shantaram, Jeetendra had suggested V. Shantaram to change her, but V. Shantaram had curtly told Jeetendra that she was not going to be changed.

Indeed, there was a spark in her. Remember the song, 'Aaj Kal tere mere Pyaar ke charche'- from BRAHMACHARI, she was a supporting actress while Rajshree was the lead actress but she walked away with the plaudits and the saree that she had worn in the song became a fashion statement.

If one were to trace a defining link that was the deciding factor in her success, it was the kind of fiery roles that she enacted on the screen, indeed at the time when the film stars were coy and demure Mumtaz spat fire, she never bothered to open verbal fuselages and this coming at a time in the late sixties early seventies had an element of novelty for Hindi cinema fans and this could be the reason how she could rise to dizzying heights after the break she got. She did not have reservation doing a drunk song with Rajesh Khanna in AAP KI KASAM- 'Jai Jai Shiva Shankar', which was in all probability first time that an actress was enjoying the spirit after being associated with the bhang as the stimulant.

The element of spontaneity that characterized her performances is what endeared her to the audience and this is what has kept her alive fondly in the hearts of her fans.