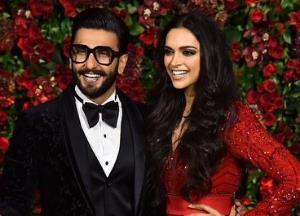 Deepika Padukone has called hubby Ranveer Singh a "trashcan", for his tendency to finish off whatever she leaves on plate at the dining table.

The actress' latest meme on Instagram is a hilarious post that has her poking fun at her actor-husband's habit. In the meme, a girl and a boy are seated at a table, eating. While the boy sips at his drink, the girl has trouble finishing her food. Then she throws the remaining food into the boy's mouth, which is wide open like a trashcan. "Open wide, trashcan!" she tells him.

Ranveer on his part commented on the post. "Hahahahahaha! BASICCC," he wrote.

"That's cute," wrote a user, while another showed solidarity to the star couple: "You aren't alone".

"All husband and wife relation is the same," wrote another user. A Ranveer fan used the situation to gush about him: "Ranveer is the love everyone deserves."

Deepika and Ranveer are currently shooting for Kabir Khan's "'83" in Mumbai, after wrapping up a stint for the film in London. Ranveer plays cricketer Kapil Dev and Deepika is cast as Kapil's wife Romi, in the film that narrates the story of India's first World Cup victory in cricket in 1983.