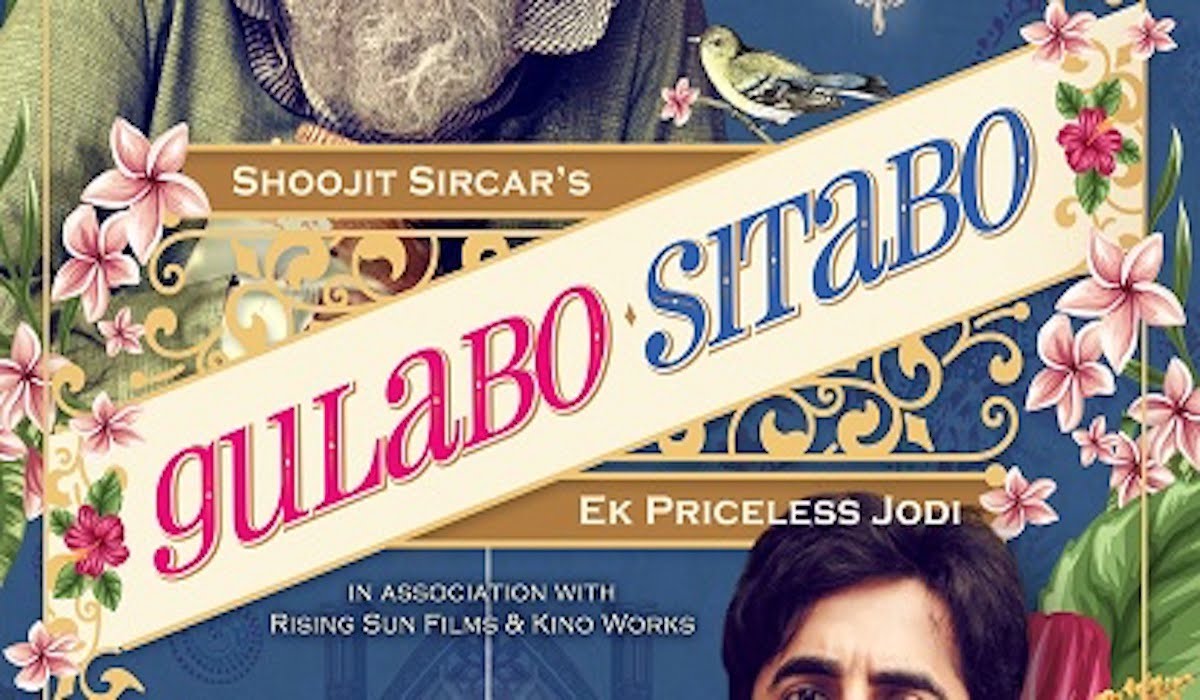 Immediate reaction when the end credit rolls
If you believed that Shoojit Sircar extracted something unbeatable from the icon of the icons – Amitabh Bachchan in PIKU then think again.

The Story of Gulabo Sitabo
Set in the old Lucknow – the city of nawabs. Mirza Sheikh (Amitabh Bachchan) a 78-year-old caretaker of more than a century old mansion – Fatima Mahal is always at logger heads with one of his tenants Baankey Sodhi (Ayushmann Khurrana). Baankey runs a flour making machine and his family has been staying as tenant in the mansion since generations paying a petty rent of Rs. 30. Both Mirza and Baankey are constantly involved in a battle of one-upmanship while the 94-year owner of the mansion aka haveli Begum (Farrukh Jafar) is in her own world struggling between her nostalgia and loss of memory.

Shoojit Sircar this time collects his strongest weapons to make a terrific dream team. The amalgamation of these fantastic four Amitabh Bachchan, Ayushmann Khurrana, Shoojit Sircar, Juhi Chaturvedi who have worked with Shoojit Sircar in those incredible work of cinematic art like Vicky Donor, Piku. This time they collaborate to tell a quirky fairy tale that travels through different traits of human emotions. Love, faith, fate, obsession, opportunism, betrayal and more.

Wide release: ‘Gulabo Sitabo’ to stream with subtitles in 16 languages

Opening with a puppet show outside the haveli where the Puppeteer (Mohammad Naushad) plays the ‘Gulabo Sitabo’ act – a story of two smart ladies from different localities of Lucknow engaged in an act of one-upmanship. The meta right from the title to the entire scenario is in sync with the rhythms of everyday life. The elementary magic of Shoojit Sircar and Juhi Chaturvedi is intact in setting up the milieu of probably old Lucknow. The dialect is perfect. Showcasing the world, we live in where personal obsession, selfishness has empowered the mindset of human. Mirza is a picture of how we are obsessed with our greed and in the bargain, we lost our ability to value what we have. Baankey is a picture of person who has allowed himself to be a prisoner of the circumstances and is unwilling to move ahead and move on.

The quirky and thoroughly enjoyable one-upmanship between Amitabh Bachchan and Ayushmann Khurrana is the major highlight. The Tom and Jerry type chemistry between the two is incredible.

Juhi Chaturvedi’s remarkable ability to design characters rooted with the given setting having a unique quirky trait in each one makes it more interesting. Almost every character enjoys a graph.

The inclusion of Vijay Raaz as Gyanesh Shukla – the Government officer from the archaeological department and Brijendra Kala as lawyer, Christopher Clark adds more dimensions and the movie then takes the socio-economic route adding layers and finds purpose.

In comparison, this time director Shoojit Sircar doesn’t have a mind-blowing seed like sperm donor in Vicky Donor or an old man troubled with constipation in Piku. In a nutshell it’s a game between a tenant and an owner format but Shoojit in his brilliance gives a fine example of a narrative unvarnished with pretension, making it a gem.

Performances
Amitabh Bachchan as Mirza Sheikh is a master class. Right from frame one, the actor in his baritone toned differently for this movie in those typical dialect/vocabulary. His walk, his deep rolling eyes and unmatched dialogue delivery makes Mirza one of his finest acts in recent times for the icon for the icons – Mr. Amitabh Bachchan. A manual for any actor on how to play an old 75+ ‘khadoos budda chacha’.

Ayushmann Khurrana is class apart as Baankey Sodhi. After all the triumphant experiments in Shubh Mangal Zyada Saavdhan, Bala, Dream Girl. Here he plays a common man with élan. Staying strong in his encounters with the living legend like Amitabh Bachchan Ayushmann Khurrana is at his natural best.

Vijay Raaz as Gyanesh Shukla is a delight, complete in his element and adding layers to the story with his nuances. Brilliant. Brijendra Kala as the lawyer Christopher Clark is simply outstanding. The actor is so at ease with his role, he makes the character his prop and surprises you. Outstanding. Farrukh Jafar as Begum is simply superb. Srishti Shrivastava as Guddo has a surprise twist and the actress excels in her short but significant role.

Other supporting actors like Nalneesh Neel as Sheikhu, Tina Bhatia as Dulahin, Mohammad Naushad as Puppeteer, Archana Shukla as Susheela, Annanya Dwivedi as Neetu, Ujali Raj as Payal, Sunil Kumar Verma as Mishra ji, Azad Mishra as Sayyad chip in with valuable support. Casting director Jogi Mallang deserves special mention. A couple of one-scene presence like Sandeep Yaadav as the gate keeper and Masood Abdullah as a relative of Begam are impressive.

Technicalities
First of all, the prosthetics done by PIA Cornelius for Amitabh Bachchan is incredible. Avik Mukhopadhyay’s cinematography captures the old Lucknow in its grace. Chandrashekhar Prajapati’s editing is sharp. Shantanu Moitra’s music adds value. And not the least, production design by Mansi Dhruv Mehta and Veera Kapur’s costume design are authentic.

Flaws
Some questions remain unanswered like the reason for Vijay Raaz at the police station.

Final words
Gulabo Sitabo is a triumph at multiple levels. A showcase of performance par excellence by Amitabh Bachchan, Ayushmann Khurrana ‘simple’ brilliance in an evocatively quirky gem written by Juhi Chaturvedi and helmed by Shoojit Sircar. Make sure you fix your date with Gulabo Sitabo. Highly recommended.