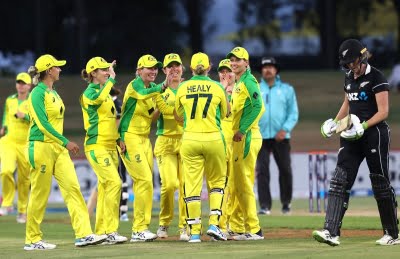 Mount Maunganui, April 7 (IANS) New Zealand’s Leigh Kasparek took six wickets but her side ended up losing to Australia by 71 runs in the second ODI on Wednesday. Australia scored 271/7 batting first and New Zealand were all out for 200 in reply.

This was Australia’s 23rd consecutive ODI win and they have taken a 2-0 lead, thus sealing victory in the three-match ODI series.

New Zealand were dealt with early blows in their chase, with opener Lauren Down falling for a duck and captain Amy Satterthwaite being dismissed for six runs. Hayley Jensen and Amelia Kerr then managed to take the hosts to 76 after which Australia made it difficult for New Zealand to score runs. Kerr remained New Zealand’s highest scorer with 47 runs.

Australia were off to a strong start with the top three putting 187 runs in the first 36 overs. Kasperek then tore through the batting order, ending the innings with figures of 6/46. Opener Rachael Haynes was their highest scorer with 87 runs off 105 balls.