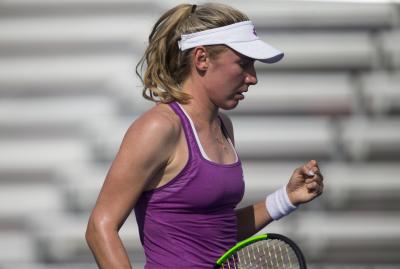 The final was the second this year to pit the top two seeds against each other and, just as in St Petersburg in February, where Anett Kontaveit defeated Maria Sakkari, it was the No.2 seed who triumphed. Alexandrova came from a break down three times in the first set and saved a set point serving at 5-6, but posted her sixth bagel of 2022 in the second set.

The 27-year-old had previously lifted the trophies at Shenzhen 2020 and ‘s-Hertogenbosch 2022 and improved to 3-2 in tour-level finals overall. The 27-year-old also extended her head-to-head lead over Ostapenko to 5-2.

One of those victories, and the only previous match in the series on outdoor hard courts, also took place in Seoul. In 2018, Alexandrova scored the first Top 10 victory of her career by upsetting defending champion Ostapenko 6-3, 6-2 in the second round. Four years on, Alexandrova reprised that result to score her fifth Top 20 win of the season.

Ostapenko, who was bidding to become the first two-time champion in Seoul’s 18-year history, falls to 5-8 in career finals, and 1-2 in 2022 finals.

Alexandrova was the more lethal player off the ground throughout the match, tallying 15 winners to Ostapenko’s 10 in the first set, and 12 in the second to the Latvian’s one. Her unforced error count was also significantly tidier, with just 17 overall to Ostapenko’s 27.

The Russian player’s quickness around the court proved key: on several important points, she was able to absorb more of Ostapenko’s power than vice versa, either eliciting the error or turning defense into offense herself.

Nonetheless, Ostapenko kept her nose in front for much of the first set. The 25-year-old attacked the Alexandrova serve with relish and led by a break at 2-0, 3-1 and 5-3. But she was unable to maintain her intensity to consolidate any of these leads, and an Alexandrova service winner wiped out her sole set point at 6-5.

Similarly, Ostapenko could not hold on to a 2-0 lead in the ensuing tiebreak, and Alexandrova won seven of the next nine points, sealing the opener with a marvellous inside-in forehand winner.

Ostapenko had come through significantly tougher battles en route to the final than Alexandrova. She had needed a third-set tiebreak to get past wild card Jeong Boyoung 6-4, 3-6, 7-6(2) in the first round, saved a match point to defeat Anastasia Gasanova 6-3, 5-7, 7-5 in the second round, and trailed Emma Raducanu by a set and a break in the semifinals. By contrast, Alexandrova had dropped just one set, to Asia Muhammad in the first round.

Trailing 3-0 in the second set, Ostapenko required a medical timeout, receiving treatment on her right foot. With her movement visibly hampered, the remainder of the match was a formality. Alexandrova dropped just one more point, sealing the title with consecutive backhand winners.