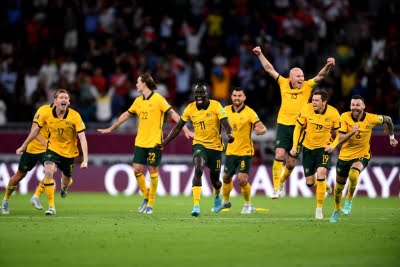 Sydney, Dec 2 (IANS) As a 1-0 triumph over Denmark sent the Socceroos into the last 16 of the Qatar FIFA World Cup, great joy has burst out across Australia, with more measures rolled out to fuel cheer for the team on its home soil.

In the early hours of Thursday morning, the Socceroos defeated Denmark 1-0 to clinch a spot in the final 16, marking the first time that the men’s team of Australia has made it to the knockout stage since 2006.

Later in the day, Albanese also responded to calls for a public holiday to be declared.

“Too late to call a national holiday after the @Socceroos huge win against Denmark last night. But if we win the #FIFAWorldCup… that might be a different story,” the prime minister wrote on his social media.

On Sunday, Australia will face the football powerhouse, Argentina in their last 16 showdown as early as 6:00 a.m. local time.

To witness the history made by the Socceroos together with crowds of football lovers, several Australian states showed their support by lighting up landmarks, offering free transport service, and setting up live-streaming sites.

As home to the iconic Sydney Opera House, the state of New South Wales (NSW) announced in a statement that the sails of the landmark would shine green and gold from Saturday night to Sunday dawn.

A large screen will be set up at Tumbalong Park from 5:30 a.m. local time in Sydney’s Darling Harbour, with retailers being encouraged to open their doors early to welcome football fans traveling in to cheer on the team.

Public transport will be free Sydney-wide on Sunday from 4:00 a.m. to 12 p.m. local time to help fans get to and from the live sites.

NSW Premier Dominic Perrottet said the live sites would be an opportunity for fans to celebrate as the Socceroos push to make history and earn a spot in the quarter-finals.

In Queensland, Lord Mayor of the state capital Brisbane Adrian Schrinner confirmed that the match against Argentina would be screened live in King George Square and Queen Street Mall.

“The City Hall will also be lit green and gold this weekend to celebrate the Socceroos’ World Cup incredible campaign,” Schrinner said.

Meanwhile, in the Australian Capital Territory, a big-screen live-streaming event is scheduled to be held outside the Canberra Theatre Centre.

The territory government added that all licensed venues have the opportunity to apply to extend trading hours for the match.

According to a statement by Football Australia, Melbourne, Adelaide and Perth will host live sites as well, while the match will also be broadcast live and free on an Australian broadcaster, enabling sports enthusiasts to watch from home.

Twitter
Flip
Koo
Previous article
Nora Fatehi draws flak for holding Indian flag upside down at FIFA
Next article
Rohit Sharma will have to work harder on fitness if he wants to prolong his career: Maninder Singh (IANS Friday Interview)
This May Also Interest You
Technology