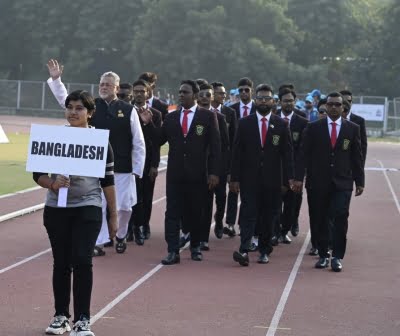 Bangladesh were put into bat by Nepal’s captain Khemananda Ghatre. The Bangla openers put on a massive unbeaten partnership to flatten the Nepal bowling attack.

In reply, Nepal could not manage 153/7 in their 20 overs. Only opener Santa Pahari could offer some resistance in the Nepal innings scoring 51 runs (54 balls, 6 x 4). Salman was adjudged the Man of the Match.

In the other round robin match played at Saket Sports Complex, South Africa beat Australia by 5 wickets to open their account in the tournament.

Electing to field, South Africa restricted Australia to 180/7 in 20 overs. Brewer Maiga Ned (69, 42 balls, 9 x 4) and Zannis Michael (34, 31 balls, 2 x 4) put together 81 runs for the second wicket to give Australia a good platform but they lost regular wickets towards the end of the innings restricting their total to 180.

Sphelele Khalala was retired hurt when the score was 132/1. South Africa lost four wickets for 47 runs but eventually was over the line in 18.3 overs. Issac Asanda Bidla was adjudged the man of the match.