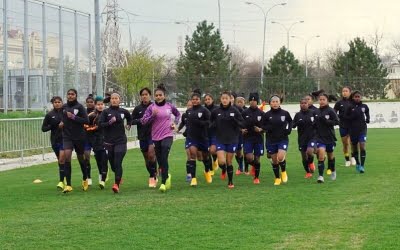 Tashkent, April 7 (IANS) Despite the extreme cold weather, the morale of the Indian women’s football team will be high when it takes on Belarus in a friendly at the AGMK Stadium in Tashkent on Thursday.

India went down fighting 0-1 against Uzbekistan in the first friendly at the same venue on April 5, in a match played in bone-chilling conditions.

“Belarus may be a couple of spots below us (FIFA ranking 56 as compared to India’s joint 53rd), but they are used to playing against strong European sides, and their level of competition is high. But our girls are getting fully prepared for the game, and I’m sure they will go all out,” said India head coach Maymol Rocky on Wednesday.

India’s optimism stems from the fact that they conceded a goal against Uzbekistan — ranked 41 on the FIFA ranking – in only the 87th minute, that too playing in hostile weather.

Experienced goalkeeper Aditi Chauhan feels the team has taken a lot of positives from that game.

“We know the things that we are doing well. We just need to work on certain areas. We are very confident of stepping up against Belarus, against a very strong side, and I’m sure that the squad is up for it,” said Chauhan.

On the 87th-minute goal by Uzbekistan, coach Maymol said, “It was heartbreak but when I consider all the recent matches. I think this was one of the best performances. Uzbekistan were under pressure in the second half.”

The team has been training in Goa since December last year in a bid to prepare for the AFC Women’s Asian Cup India 2022. A number of players from the under-17 side have also been included in the camp and Maymol says it is a good move.