Family in tow, AB de Villiers gears up for IPL 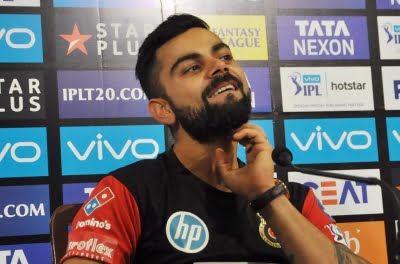 Chennai, April 8 (IANS) Few overseas cricketers are cheered as much in India as AB de Villiers is — the South African gets almost the same applause that is reserved for India and Royal Challengers Bangalore skipper Virat Kohli at Bengaluru’s Chinnaswamy Stadium.

“Look it is humbling to get the same kind of reception as others. I don’t know how it has happened over the years. But it is very special that I get a special feeling. I will miss the crowds. I am enjoying the company of the teammates,” said De Villiers while speaking to the media on Thursday, the eve of his franchise’s opening match against Mumbai Indians.

The former South African captain, who is known as 360 degree batsman, has brought his family to India this time.

“My wife has joined me with my three kids this year. So there is a special feeling. I am going to miss the crowd. I mean I am not getting any younger. I’m just looking forward to get out and perform.”

“We know it’s a long road ahead, but we’re going to have a lot of fun,” he added.

De Villiers had earlier spoken on RCB’s Bold Diaries video about his preparations and net sessions ahead of the IPL.

“I had a nice, few training sessions, a lot of fitness, a lot of gym work. I feel ready and I am as young as ever so looking forward to it,” de Villiers said.

“We have spent a lot of time in the room in the last week and before that, we were travelling. It was quite intense coming out. I hit the floor running and gave it my absolute best. Had a lot of fun out here tonight and I was hitting the ball okay. Not a 100% so I will come back tomorrow for a bit more,” de Villiers added.