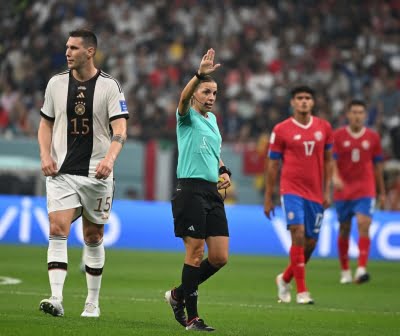 <br>When the kick off of the last and concluding match of the Group E, French referee Stephanie Frappart entered the record books as the first woman to take charge of a FIFA World Cup match.

Her appointment was announced by the tournament organisers on Tuesday and means the 38-year-old match official will take her place in the history of the game. Frappart took charge of two matches in the qualifiers for the tournament, but her presence at the World Cup itself is a significant moment.

The Frenchwoman was the fourth official in the 0-0 draw between Mexico and Poland of Group C, becoming the first woman to occupy the role at a men’s World Cup.

Frappart is no stranger to the biggest stage in the game, having officiated in six matches at the last two FIFA Women’s World Cup competitions – Canada 2015 and France 2019.

"I felt enormous emotion because it wasn’t particularly expected that I would be picked. So, (I feel) a lot of pride, a lot of honour, to represent France at the World Cup."

Frappart said that being a referee at the FIFA World Cup 2022 would mean that she would have to keep emotions in check to ensure optimal performance on the pitch.

"I think I’ll have everything that’s around me in mind, and the aim will still be the same, that is the referee according to the performance on the pitch. So, I’m really going to head into this with enormous emotion, but you have to channel that because clearly the important thing is the pitch."

"The first thing will be all the emotions of returning to the World Cup stadium, packed with a large crowd and plenty of expectations. But after that, I’ll be focused on the pitch because we need to make the correct decisions and perform well by concentrating on the primary objective on the pitch."

Besides, two other women referees are on the brink of history as they look set to officiate at the men’s football World Cup in the coming days after Frappart.

Yamashita Yoshimi and Salima Mukansanga have all been named among the 36 referees selected for the tournament that concludes on December 18.

They will also be joined by Neuza Back of Brazil, Mexico’s Karen Diaz Medina and American Kathryn Nesbitt who are headed to the World Cup as three of 69 assistant referees. Japanese Yamashita is set to appear at a second consecutive World Cup after officiating the 2019 Women’s World Cup in France. She also took charge at the 2020 Olympic Games, held in 2021, in a game between the USA and Sweden.

Yamashita is another one who has set her own records on the referees front this year. She officiated the AFC Champions League between Melbourne City and Jeonnam Dragons in the FC Tokyo and Kyoto Sanga match of the J1 League – becoming the first female referee to do so.

The 36-year-old is eagerly looking forward to the World Cup and her chance to take the centre stage as a match referee.

"There are hardly any female referees in the Middle East, so I would like to see that change, with the Qatar World Cup as the catalyst," she said recently.

"The fact that women are officiating for the first time at a men’s World Cup is a sign to other people that women’s potential is always growing and that is something I also feel strongly about."