Future not clear, says Flick after deciding to leave Bayern 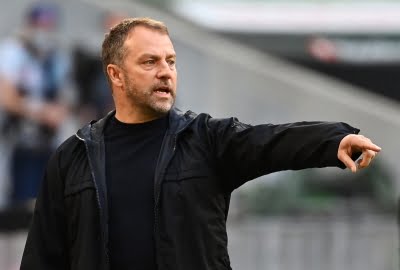 Berlin, April 18 (IANS) Hansi Flick has said he wants to leave as Bayern Munich coach after the season, making the announcement after the team went seven points clear at the top of the Bundesliga with a 3-2 victory in Wolfsburg.

Flick said he had informed club bosses in mid-week about his decision and told the players after Saturday’s game which moved them closer to a record-extending ninth straight title, DPA reported.

There was no immediate reaction from the club where he is contracted until 2023.

Flick did not give details but he has had a strained relationship with Munich board member sports Hasan Salihamidzic over the past months.

In addition, the national team coaching job has become vacant as Joachim Loew will step down after 15 years in summer. Flick was Loew’s assistant between 2006 and the World Cup title 2014.

Flick became Munich coach in November 2019 and won six titles with the team in the past season. This term they can only win the Bundesliga.

“I would like to be released out of my contract at the end of the season,” Flick said. “We have had two fantastic years. I am delighted with my team. Thanks to the club for being allowed to train such a team.

“My future is absolutely not clear,” he added. “Of course, the national team is an option every coach has to consider. I have to digest everything, the last weeks weren’t easy.”

Munich captain Manuel Neuer said: “It was emotional for all of us. We have had a nice and successful time. It is good he told us himself, that shows our relationship is good.”

The Bundesliga is Munich’s last title option after a Tuesday exit in the Champions League as title holders against Paris Saint-Germain, and they made no mistakes in a seventh straight win against Wolfsburg.

Teenage sensation Jamal Musiala scored a brace with a low shot and a looping header for now six season goals, and Eric-Maxim Choupo Moting got the other.