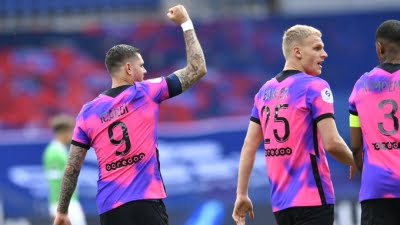 The Argentinean striker, coming off the bench, headed home Angel Di Maria’s cross in the 95th minute to finalize the nail-biting closing period of the game, as all the five goals were scored in the last 20 minutes, Xinhua reported.

“I think we deserved the victory, but the way we got it was very emotional, and not easy for us,” said PSG head coach Mauricio Pochettino. “The most important thing is to show character, to have a ‘never-give-up mentality and always keep fighting and we needed that today to get the three points.”

As part of the international promotion of Ligue 1, the game at Parc des Princes was scheduled at 1:00 p.m. which will ensure a prime time broadcast in Asia, the region in which French Professional Football described “Ligue 1 enjoys wide exposure and growing interest.”

PSG controlled the ball from the beginning of the match but was unable to make the chance count. It was the visitors who broke the deadlock as Denis Bouanga’s goal in the 77th minute put the Greens ahead.

Kylian Mbappe responded quickly as he scored the equalizer only one minute later and made the second through a penalty kick in the 87th minute to give PSG the lead.

“I really wanted to play and I got on for the last 25 minutes. I had a chance and I scored. I couldn’t have wished for more,” Icardi said.

The win helps the defending champion cut Lille’s lead to only one point on the standings.

Third-placed Monaco also won on Sunday as Kevin Volland, Gelson Martins and Stevan Jovetic were on target to secure the team 3-0 victory at Bordeaux.