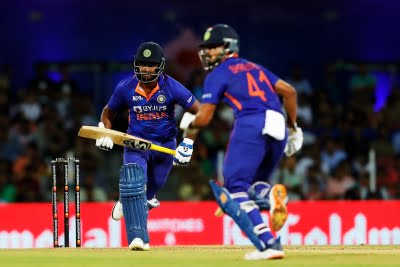 Lucknow, Oct 6 (IANS) India skipper Shikhar Dhawan was very impressed with the fightback shown by Shreyas Iyer, Sanju Samson and Shardul Thakur to almost take India over the line. He also admitted that India could have been better in bowling and fielding.

Samson displayed valiant effort in his unbeaten knock of 86 off 63 balls while Iyer hit a counter-attacking fifty off 37 balls and Thakur produced a stunning late cameo of 33. But the trio’s splendid efforts to rescue India from 51/4 inside 18 overs went in vain as India lost to South Africa by nine runs in a truncated 40-overs a side ODI series opener.

“Very proud of the way the boys played this game. Of course while chasing, we didn’t get a good start. It’s tremendous the way Shreyas, Samson and Shardul played, it was amazing to watch it,” said Dhawan in the post-match presentation ceremony.

With the ball, India did well to reduce South Africa to 110/4 in 22.2 overs. But they were then unable to separate the duo of David Miller (75 not out off 63 balls) and Heinrich Klassen (74 not out off 65 balls), who shared a rollicking stand of 139 runs off 106 balls to take South Africa on a competitive total on a pitch which had something for bowlers. Moreover, India dropped four catches and had many mis-fields as well to give easy runs to South Africa.

“I thought 250 was too many runs, because the wicket offered a lot of turn and seam. We felt that we could have done better with bowling. Even fielding-wise as well, we leaked a few runs. But that’s part of the process and they are young boys. It’ll be a good experience and learning for the young boys and I am sure they will learn a lot from this,” added Dhawan.

South Africa captain acknowledged the fight shown by Samson, and was pleased with how his side held their nerve to get a nine-run win and more importantly, 10 crucial ODI World Cup Super League points.

“A good fight at the end, obviously Sanju pushed us at the end, but the boys stood firm and took us to the win. There wasn’t much grass on the surface, we lost a couple of wickets in the middle overs, myself and Aiden (Markram), but the boys knuckled down. Miller and Klaasen played positively, stung together a partnership and took us to a good score.”

Bavuma admitted to being scared of bowling losing the way in middle overs, but was pleased with their first win on tour of India. “Bowling upfront was good, in the first 15 overs by KG and Parnell. I thought we lost our way in the middle overs, gave away far too many runs, but at the end, the result did go our way and I’m happy with that.”