It doesn't sit comfortably with me: Dominic Cork on Deepti's run-out of Charlie 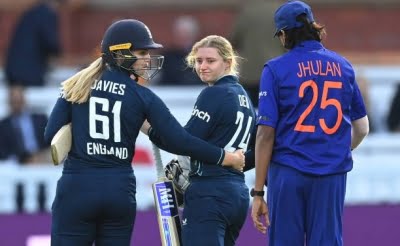 London, Sep 25 (IANS) Former England men’s all-rounder Dominic Cork has said India spinner Deepti Sharma’s run-out of Charlie Dean at the non-striker’s end in the third ODI against the hosts hasn’t been able to sit comfortably with him.

In the 44th over of England’s innings, Deepti came up to bowl to number eleven Freya Davies. Charlie, at the non-striker’s end, attempted to go early and steal a few yards by wandering out of non-striker’s end.

On seeing that, Deepti turned around to run her out in her delivery stride, which meant a 16-run win for India and a 3-0 series sweep.

Deepti’s run-out of Charlie immediately attracted boos from the crowd at Lord’s and divided the cricketing world yet again on the run-out from non-striker’s end rule, which is valid as per the laws of the game.

“It’s in the laws and that needs to be sent around the world — that is allowed, and we’ve seen it enough times before. Unfortunately, Charlie Dean is in tears — she has left her ground. Maybe I’m old-fashioned but I wouldn’t like to finish a game of cricket like that,” said Cork after the match ended.

Cork, who played for England from 1992-2000, felt it would have been great to give Charlie a warning instead of running her out from the non-striker’s end. “It’s nothing to do with India or any other team — if England finished off a game in that way, I would say exactly the same.”

“If somebody beats you, they beat you. Give them a warning and say ‘if that happens again, that was your first and last warning’. That’s the way I would do it and I thought it was bubbling it up to be a great game.”

Cork denied that he was being biased on England’s side on sympathising with Charlie. “It’s not with me. I wouldn’t like it as a player and I wouldn’t have liked it at Derbyshire when I was coach there, so let’s just forget anything about England bias, it’s nothing to do with that.”

“It’s just the fact that I don’t like it. I would say exactly the same if Dean did this and Sharma was batting. It doesn’t sit comfortably with me.”

Charlie nearly took the game out of India’s hands with her impressive knock of 47 that helped England recover from a despondent 65/7 in the run chase, till that dramatic run-out happened.

Twitter
Flip
Koo
Previous article
It was only in 2000 that Julia Roberts got equal pay for equal work
Next article
Ashwin, Sehwag, Hales speak in favour of Deepti's run out of Charlie from non-striker's end
This May Also Interest You
News