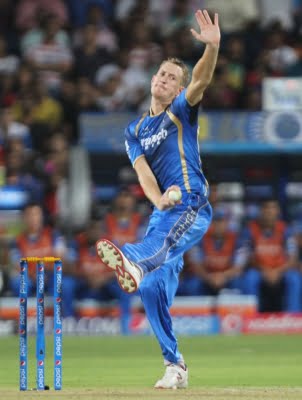 Mumbai, April 11 (IANS) Indian Premier League’s (IPL) most expensive player of all time Chris Morris will be on display and facing a huge challenge when Rajasthan Royals (RR) take on Punjab Kings in their opening encounter of this season on Monday.

With Jofra Archer missing from at least the first part of the IPL season due to injury, Morris will have to shoulder the responsibility of being his team’s frontline bowler as RR will look to stall the power-packed batting of Punjab Kings.

RR’s biggest problem is the lack of support to overseas pace bowlers. Last year, Archer failed to get any support from others as only spinners did well. This time though Morris should have the support of pace bowler Mustafizur Rahman.

However, whether Rahman finds a place in the playing XI remains to be seen. With batsman Jos Buttler, all-rounder Ben Stokes and Morris a certainty, RR will be hard-pressed to pick between Rahman, a fast bowler, or other big-hitting overseas batsmen like Liam Livingstone or David Miller.

“Sanju (Samson) and I will both agree that it’s a big blow for us. Jofra is a very vital part of our make-up and not to have him is unfortunately the reality of it. We have to work around it and plan contingencies,” Kumar Sangakkara, the Rajasthan Royals director of cricket, told media in an interaction on Sunday afternoon.

With the Mumbai wicket being batting-friendly, it is likely that RR will go in with Rahman who is known to bring variations with his cutters and can extract something from the pitch.

Punjab Kings batsman KL Rahul, who was the Orange Cap winner last year, had an indifferent run in recent times at international level. But he and Mayank Agarwal could again be the backbone of Punjab franchise’s batting.

It will also be interesting to see how Punjab balance their overseas quota of four players. They will play West Indies batsman Nicholas Pooran but whether they will play Dawid Malan, the top ranked batsman in T20 Internationals, or not remains to be seen.