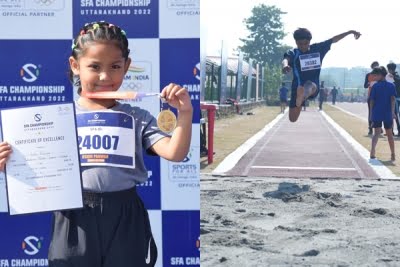 Aiming to revolutionise sports at the grassroots level in Uttarakhand, India’s leading fully integrated digital plus on-ground multi-sport platform, Sports For All has been organising the second edition of this Olympic-style event in Dehradun from December 7 to 13 with 13 sports being played at five different venues.

The event also boasts an overall prize pool of close to Rs 3 lakh as 9,000 budding players are participating from 418 schools across Dehradun, Haridwar, Rishikesh, Nainital and other cities of the state.

In the U-6 girls 50m, Oshin came first with a timing of 11.507 seconds while Ditya Goswami of Touch Wood School (12.843s) and The Arcadia School’s Prakrti Krishnan (13.866s) won silver and bronze medals respectively.

Mayank Rathour and Abhijeet Singh were the two other gold medallists for Maharana Pratap Sports College. Mayank secured the top spot in the boys U-18 3000m with a timing of 10.25:462 minutes whereas Abhijeet won the boys U-14 shot put when he landed a distance of 8.5m on the second attempt.

Another highlight of the day was U-12 girls long jump wherein Tejasvini Gupta bagged gold medal with a jump of 3.22m while Him Jyoti School’s Shailza (3.03m) and Priyanshi Kathait of Agape Mission School (3.01m) won silver and bronze medals respectively.

Apollo International School’s Rahul lifted the title in the U-16 boys shot put with a throw of 10.89m.

Him Jyoti School’s Karina Bhagri and Praja Barsha also won long jump gold in the girls U-14 and U-16 respectively.

SFA, who is the official partner of the Indian team for the Olympic Games, Commonwealth Games and Asia Games, will also empower coaches with the Coaches Reward Program, valued Rs 12 lakh.

The championships has also been held in Mumbai and Hyderabad previously during its 10 editions so far with more than 1,50,000 students participating from over 3000 schools.