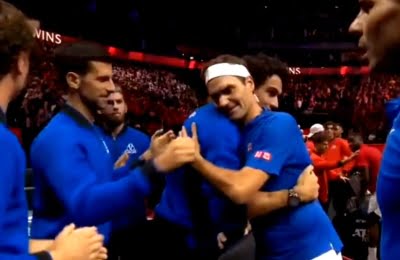 London, Sep 24 (IANS) Several top men’s and women’s tennis players, including Rafael Nadal, Iga Swiatek and Chris Evert among others, gave an emotional farewell to Swiss ace Roger Federer who retired from the sport after losing the doubles match at the Laver Cup in London’s O2 Arena on Friday.

The 41-year-old Swiss great, the winner of 20 Grand Slam singles titles, teamed up with his long-time friend and rival, Nadal in his last contest, losing a doubles match to the American duo of Jack Sock and Frances Tiafoe of the United States 4-6, 7-6(2), 11-9.

Federer had announced last week that the Laver Cup would be his final ATP tournament.

Nadal could be seen trying to keep his emotions in check as he sat alongside Federer after their loss in the doubles to the American pair. Federer, who won 103 tour-level titles and spent 310 weeks at No. 1 in the ATP Rankings, first faced Nadal in 2004 at the ATP Masters 1000 event in Miami. They slugged it out a further 39 times over the years, competing against each other in 24 finals.

World No. 1 women’s singles player, Iga Swaitek tweeted that her sleep and practice session could wait for this historic occasion.

“I have a practice in the morning but sleep needs to wait tonight. One last time @rogerfederer #LaverCup,” tweeted the Polish player.

Two-time Wimbledon champion Petra Kvitova tweeted, “Beautiful to watch until the very last match. What a way to finish a career. Thank you @rogerfederer.”

Belgian tennis great Kim Clijsters tweeted, “Damn you Roger … will be walking around with swollen eyes for the whole weekend,” while former Danish star Caroline Wozniacki said, “What an emotional night! One and only @rogerfederer.”

Twitter
Flip
Koo
Previous article
Brook must be pencilled in at No. 5 in England's first T20 World Cup game: Hussain
Next article
Manoj, Konkona stir up a scheme in spiced up teaser of 'Soup'
This May Also Interest You
News