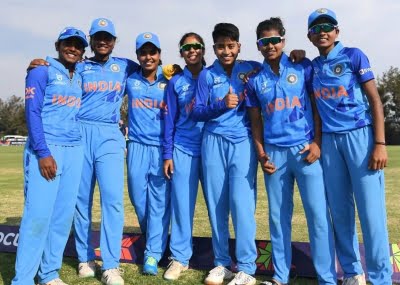 Potchefstroom, Jan 26 (IANS) India, New Zealand, England and Australia qualified for the semi-finals of the ICC U19 Women’s T20 World Cup after a fascinating Super Six stage came to an end. The semi-finals will now be held on Friday here.

England’s crushing win over West Indies on Wednesday evening ensured that they finished at the top of Group 2 ahead of New Zealand, meaning they will face the second-placed team from Group 1, which is Australia, in the second semi-final. New Zealand, on the other hand, will face India in the first semi-final.

Bangladesh’s brilliant win over UAE completed their superb showing at the tournament, but was unable to boost the team’s net run rate sufficiently to overhaul Australia in second place in Group 1. It also meant that India finished on top of a competitive Group 1.

The winners from the two semi-finals will face off in Sunday’s final, which will also be held in Potchefstroom. India had earlier topped Group D in the competition by beating South Africa, UAE and Scotland.

In the start of their Super Six round, they were bowled out for a paltry 87 by Australia but bounced back in the very next day with a thumping seven-wicket win over Sri Lanka, which also assured them of a spot in the semi-finals.

For India, vice-captain Shweta Sehrawat will be very crucial with the bat, apart from captain Shafali Verma. She is currently second in the list of top-run getters in the competition, with 231 runs in five innings and has been unbeaten in three of them. One of those three unbeaten knocks came as a number six batter, instead of being the regular opener.

With the ball, left-arm spinner Mannat Kashyap and leg spinner Parshavi Chopra hold the key. The duo are the only Indian bowlers who have snapped four-fers in the competition.

Twitter
Flip
Koo
Previous article
Waugh, Johnson, Finch to be Clarke's replacements in commentary for Australia tour of India: Report
Next article
Nawazuddin Siddiqui to make his Telugu debut in Venkatesh’s ‘Saindhav’
This May Also Interest You
Sports