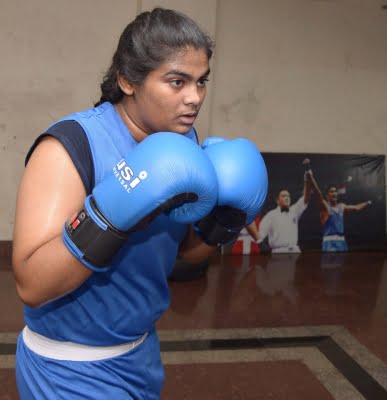 Kielce (Poland), April 22 (IANS) The Indian women’s boxing squad is on way to winning a rich medal haul in the Youth Men’s and Women’s World Boxing Championships here as seven of them are in the gold medal round of their respective weight categories.

Gitika Narwal will take on home favourite Natalia Dominika in the gold medal round of the women’s 48kg.

Baby Naorem Chanu will face a more challenging task as she takes on Russia’s Valeriia Linkova in the women’s 51kg final.

In the third final, Poonam Poonia will face Sthelyne Grosy of France in the 57kg.

In the 60kg final, Vinka will fight it out against Zhuldyz Shayakhmetova of Kazakhstan.

Arundhati will face Barbara Marcinkowska of Poland in the women’s 69kg final while Sanamcha Chanu will take on Dana Diday from Kazakshtan in the women’s 75kg final.

All the finals will be held on Thursday evening.

Twitter
Flip
Koo
Previous article
Have other things to worry about: MI's Boult on Mankading
Next article
IOC EB supports proposal to modify Olmpic motto
This May Also Interest You
Sports