CHHOTA BHEEM KUNG FU DHAMAKA movie review is here. The fourth film in the Chhota Bheem series after THE THRONE OF BALI, THE CURSE OF DAMYAAN and HIMALAYAN ADVENTURE 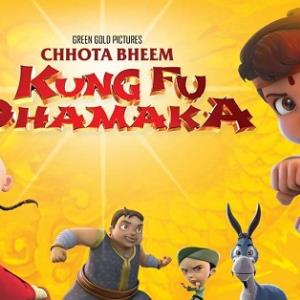 Indian animation gets a good ‘kick’ of pious virtues and entertainment that has 3D at par with Hollywood. The never endingly endearing appeal of Chhota Bheem and the teachings of Kung Fu that has undercurrents of divine philosophy is twined nicely by Rajiv Chilaka in this child-friendly movie that allows parents to sit through and enjoy as well.

The endearing kid icon this time with his gang from Dholakpur – Chutki, Raju, Kalia along with Dholu, Bholu and Jaggu the monkey are in China. They are competing for the annual martial arts competition. The winner will get the dragon trophy by Emperor Jiang. Emperor Jiang’s daughter Princess Kia is blessed by a dragon god who has magical powers. Chhota Bheem and his friends are in China courtesy Ming – a common friend of Chhota Bheem and Kia. As the competition is about to enter its final phase, Emperor’s wicked nephew Zuhu, attacks with his mysterious army and kidnaps Princess Kia.

The evil Zuhu wants to settle old scores with his uncle – Emperor Jiang and desires to rule the universe by forcing Kia to ask for the magical super power from the dragon god who is spiritually connected with Zia. Emperor announces half of his treasure as a reward to the one who rescues Kia from the clutches of the evil Zuhu. Perfect time for Chhota Bheem and his friends from Dholakpur to show their skills and make the difference.

Director Rajiv Chilaka and his team from Green Gold Animation create a visually coloutful, elegant and stunning world, the visual grace and the 3D feel is as solid as any respectable Hollywood animated adventure. Superb. Each character is well etched and minutes such as the tilak on Chhota Bheem’s forehead, the scar on Zuhu face, the eyelids of characters, every minutes and nuances is taken care of. The background score adds to the fun.

The writing by Nidhi Anand and Teja Pratap is laced with good virtues and motivates the target audience to believe in their instincts and be aware. Life gives lessons in various ways and no one is invincible. The voice over’s are niece, especially Sonal Kaushal the voice for Chhota Bheem – sweet, charming and endearing.

Its good, charming, endearing with state of the art animation and solid 3D but the overall soulful sweep is missing somehow. A better understanding of Kung Fu with Indian ethos could have done wonders beyond imagination. The length is a drawback.

CHHOTA BHEEM KUNG FU DHAMAKA is a great looking animation and good entertainment, that is piously designed for its target younger audience and it doesn,t makes any extra effort to please the adults because they get involved as well. Visually stunning, you won’t find any frame which is not a visual delight and all this is enhanced by a solid 3D effect. The movie serves Ladoos of good desi virtues, which your grandmother offers when you visit her at your native place during summer vacations.