Arjun Kapoor & Malaika Arora click love-filled images of each other 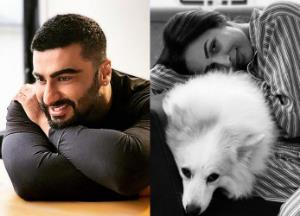 Actors Arjun Kapoor and Malaika Arora clicked photographs of each other, giving a sneak-peak into their love-filled Sunday.

Arjun took to Instagram, where he shared a photograph of himself. In the image, he is seen smiling as he rests his head on the table.

Also Read: Have grown up being a cinephile: Arjun Kapoor

He captioned the image: "When she caught me smiling."

Malaika then playfully commented: "Very talented photographer I must say."

Later in the day, she shared a black and white photograph of herself posing with her pet dog.

To which, Arjun replied: "The photographer got Skills gurl!"

This is not the first time the two have shown love for each other on social media.

Malaika and Arjun have frequently posted cryptic romantic messages for each other and photographs from their vacations together.

After keeping their relationship under wraps for a very long time, Arjun and Malaika have now become more open. From dinner dates to parties and film screenings, the couple have been photographed together several times.

On work front, Arjun will next be seen in "Panipat", a historical drama directed by Ashutosh Gowariker. The film also stars Kriti Sanon and Sanjay Dutt.