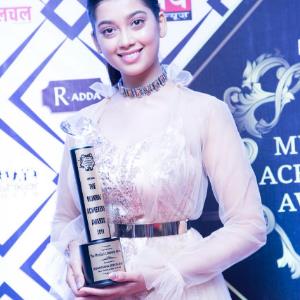 Digangana Suryavanshi who acted in few of renowned Bollywood films like FRYDAY, JALEBI & RANGEELA RAJA have recently got honored at the Mumbai Achiever awards for being Most Talented Actress of the year.

At the event, she was looking gorgeous in a highly embellished peach color gown which she carried gracefully with a choker and a pearl bracelet added to it completed her look for the event. Indeed, with no doubt it was difficult to take eyes off her.

After receiving the award, the actress expressed her gratitude. She said, “Getting an award it feels amazing. Receiving this award on my parents’ anniversary is very much special. This appreciation is what we all actors need and it makes me work harder.”

The year has indeed kick started with a bang for Digangana as awards starting falling into her bag. In initial period of year, Diagangana received a Rising Star award from Power Brand Award for Immense work and contribution towards Hindi Cinema. Digangana also won Dadasaheb Phalke Award for Emerging talent of 2019. She also received Maharashtra Sanmaan Award for Double Debut Distinction. On getting the award Digangana's fans very very happy about her success and congratulated her on social media.

She is one of the prominent names in the television industry and also known for her daily soap VEERA … EK VEER KI ADARASH VEERA. She was also a contestant for Salman Khan’s anchored reality show BIG BOSS 9.

Quora opens up its AI chatbot app Poe for public use