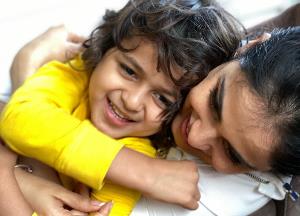 Actress Genelia Deshmukh's first born Riaan has turned a year older and she is super emotional.

Genelia on Monday took to Instagram and penned a lengthy note for her son, wishing him abundant love.

"Every parent says 'I don't want him to grow up, I want to freeze this age forever'.. But I don't.. I want to enjoy every year of yours, I want to see you grow into a fine young man, I want to give you wings to fly and I'd like to be the wind beneath those wings. I want to tell you that life is tough but you are tougher, I want you to always believe in yourself no matter what happens cause I will always believe in you," she wrote.

Genelia feels the birth of Riaan is one of the greatest things that happened to her.

"Apart from everything I want and I wish for you, the one thing I never want to fail to let you know, is that I love you so so so much and you are the greatest thing that happened to me.. There is nothing I'd rather see than your smile and nothing I'd rather hear than your laughter. For all the things my hands have held, the best by far is you. Happy Birthday to the little boy who made me a mom- My first born," Genelia added.

Genelia got married to actor Riteish Deshmukh in 2012. She became mother to Riaan in 2014. The couple's second son, Rahyl, was born in June 2016.